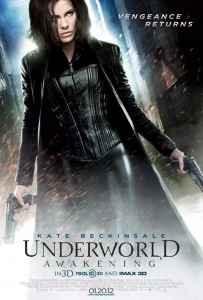 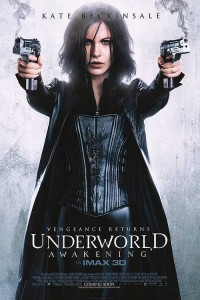 Underworld is one of the few modern films that I seem to watch regardless of quality. I always try to fight it—I haven’t seen any in the theater since the first—but inevitably I see them. Coming at the fourth entry, now with a distinct love of B-Movies firmly in place, I revelled in its flaws and happily feasted on its fun action. It’s not about plausibility and logic in Underworld, it’s all about fun and being cool. That might not seem like enough to hold up a movie, but it works if you don’t expect anything else other than that, and if your idea of cool is the same as your thirteen-year-old cousin.

So yeah, this movie’s cool as shit. For those wondering, cool as shit is cool that is not quite cool as ice (and for more on being cool as Ice, you’ll just have to wait until it gets a little hotter. How’s that for cryptic blog-a-thon advertising?). OK, shameless shitty plugs aside, Underworld: Awakening is cool. It’s filled with the vampires battling werewolves stuff you’re expecting, but also things like Selene resurrecting a vampire by cutting his stomach open and reaching inside to pump his heart for him. I recently took a CPR/First Aid class, and I’m glad they didn’t make us practice this technique on each other. Could get messy. Oh, and what about the giant “I wish I was the Incredible Hulk” werewolf? And let’s not forget when Selene, at the bottom of an elevator shaft, shoots out the floor of a hurtling elevator to allow her to successfully break through it and survive as it hits the ground. It doesn’t get much cooler than that, am I right? But really, the reason this movie brought more asses to seats than any previous Underworld movie is the ridiculous number of times Kate Beckinsale is forced into crawling positions to accentuate her ass in those tight leather pants. Underworld: Awakening may have been directed by series newcomers Måns Mårlind &
Björn Stein (who apparently have massive egos as they bill themselves only as “Mårlind & Stein” during the credits), but they understand why the Underworld series has lasted to a fourth entry. This is something series creator (and husband to Beckinsale) Len Wiseman clearly forgot by leaving her out of Underworld: Rise of the Lycans. No one cares about the history of your world, they care about Kate Beckinsale’s ass. I can’t say it any plainer than that.

So with the daring duo of Mårlind & Stein at the helm, Underworld: Awakening is actually a very good-looking film. You’d expect a January release helmed by veritable newcomers to Hollywood to be overly flashy and have the action cut all to hell, but it’s surprisingly a competently made film. It’s a very quick movie, coming in at less than eighty minutes without the credits and the recap intro scene, and for the most part it’s well paced. Let me tell you, when it comes to B-movies even sixty minutes can be torture, so I was happy to find that it moved well and kept the action coming almost non-stop. The film looks like all the others as well, and by that I mean that everything is blue. Except for the things that are kind of gold-ish, there’s a lot of those too.

The FX seemed to be a mixture of CG stuff and physical FX, and the blend was done very seamlessly. Werewolves jump around A LOT in this one, and that’s all done in CG, but many of the up close and personal moments are dudes in suits. And the suits look fantastic. I know I’m in the minority here among modern film fans, but there’s no CG effect that will ever top a dude in a quality suit. Imagine Predator if the Predator was all (or mostly all) computer. Oh right, Predators. Yeah, they’ve already made my point for me. While the suits are great, some of the CG wolves don’t fare so well. There’s one that gets shot at the end of a hall that is especially bad, looking like his animation routine was ripped directly from The Fifth Element‘s PS1 game. I guess if your movie costs 70 million dollars (which is no small sum), you must have less FX in order for them all to look good. This doesn’t really matter because the lion’s share of the CG looks good and blends well enough for the fun-havers to have their fun, and my intentions are not to rain on anyone’s fun parade.

But I’d be remiss not to mention the thing that really got under my collar and rained on my personal fun parade: the fucking ridiculous flashing lights in the lab scenes. Apparently when shit goes down at Antigen Corp. all the lights start cycling and flashing incessantly. In an emergency, isn’t it important to keep the lights up, so you can safely run down a hallway to exit the building? This is the future though, so maybe safety practices have changed and human eyes have evolved to see better in flashing lights. So let’s just say that’s the case. Well, there’s one flaw in that. My eyes haven’t evolved yet, so flashing is distracting as FUCK. I love sci-fi and I wanna be up on the new hip thing, but I just couldn’t wrap my head around the goddamn flashing lights. The movie should seriously open with a strobe light warning screen, as a good portion of the film is set in this location.

Underworld: Awakening is a very well-made Underworld film and fans of the series should definitely check it out. I had a blast watching its over-the-top fun, and I couldn’t give two shits about the fact that its characters are flat and its plot is filled with stupid logic holes. What can I say? Underworld has always been fun yet laughably shitty, and Underworld: Awakening is one of the best ones at being just that.