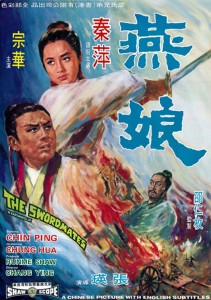 Once I decided not to care and just have fun, the film became a lot more enjoyable.  About this time (halfway through the film), another villain comes to the forefront and steals the show. He’s Iron Claws Wang Ying, played by the always awesome Yueng Chi-Hung, and he’s a badass motherfucker. Perhaps this term is overused, but here it is truly the case. Going up against hordes of swordsmen with only his clawed fists, Iron Claws takes them out handily. By this point I realized that the strength of this movie wasn’t storytelling, but simple popcorn entertainment. But while it does provide a lot of stupid fun for genre fans, make no mistake, this is an average film at best. It’s like a greatest hits of martial arts films with numerous ambush scenes, a tea house scene, a bandit feast scene, mediocre 60s fights, etc. It’s everything you’d expect from a Shaw Brothers film of the era, but nothing, besides Iron Claws, that makes it stand out from the crowd.

The direction is fairly well done though, with more energy than I’d have expected from filmmakers that traditionally weren’t martial arts filmmakers. No idea how these two found themselves at the helm of this one, but they do a good job with the camera. If only they had a better script to work with. Anyway, there are lots of nice whip-pans and snap-zooms, as well as excellent moving camera and overhead shots. Their use of handheld also stands out during the fight scenes, where at times the cameraman is seemingly just rolling around on the ground to capture specific moments in the action. It might sound dumb, but it works perfectly.

The film may be titled The Swordmates, but other than a couple of passing references to the sword of Chin Ping, and the sword of one of her acquaintances being a matched pair (the Sun and Moon Swords), they never delve into this background information at all. In other Shaw films, there might be a revelation around this, or some story about babies separated at birth. In The Swordmates, despite naming the film after this sub-plot, it’s only a couple of quick lines that get in the way of the fights. I’d be all for naming the film Iron Claws Wang Ying, but the days of films about Chinese boxers and their amazing hand-to-hand prowess are still a little ways off at this point. It would make more sense to title it after the villain though, as the villains are the true lead characters in the film, and are given much more character development and time on-screen than the heroes. So in the final minutes when one villain is forced to battle Iron Claws, it’s far more exciting and tense than when it cuts back to the heroes deftly fighting through yet another wave of nameless bandit goons.

It might be easy to write off the fractured storytelling as an Eastern thing, but I think it’s more a case of just shitty writing. The ending here is definitively an Eastern ending though, showing this story to be merely a facet of a larger political struggle without any real closure. This battle is won, but the war continues and all that. Westerners seem to abhor this type of story, but I think it works pretty well here given the threadbare nature of the rest of the film. If nothing else, The Swordmates does feature a shitload of fights and action. There’s always that.

The Swordmates also contains one of the best subtitles I’ve seen in some time:

Somehow I don’t think that’s a very good translation. Did they say “dude” in the 15th century when this story is set? I don’t know for sure, but from now on I’m going to believe that they did.

Next up in this chronological series of the Shaw Brother’s martial arts films, it’s Lo Wei’s The Golden Sword with Cheng Pei Pei!