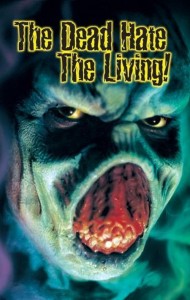 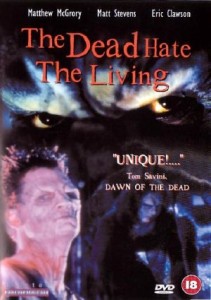 The Dead Hate the Living is filled with horror movie references, which is usually the kind of shit that I despise in films, but here it gave the film something of a fun, tongue-in-cheek quality that really worked. It was also a big help that the characters where filmmakers so when they reference Fulci or Bruce Campbell it makes sense; they’re horror nerds fulfilling their dream of making a film of their own. If you’ve ever made a horror film, you know the kind of nonsense that occurs on-set. The film walks a tightrope between the traditional scary tone of a horror flick, and this more light-hearted, jokey one, and it does so remarkably well. It’s not a horror comedy in the truest sense of that genre, but it delivers both laughs and scares a-plenty.

On the FX front, there’s some incredibly fun, gory work that looks great, mixed in with some truly awful looking stuff. Some of the poor work can be explained by the plot, as these FX are supposed to be created by the character in the film, who obviously has no formal training in makeup FX. But some of the bad work is not of this variety and therefore is simply just shitty FX. I don’t have the heart to bag on the movie much though, and any bad FX work is clearly the victim of the film’s small FX budget. I’m no financial wizard, but it always seems like in a horror film you should pump as much money as you humanly can into the FX. I’m sure Parker did everything he could to do that, as he clearly has a thing for gory gore, but I can’t help but be disappointed by many small moments throughout the film that needed just a bit more. It’s a shame that the film’s budget isn’t equal to the ambition contained within the script.

Parker’s visual style is subtle, but full of great shots. Lots of wonderful atmosphere and mood burst forth from the screen, creating a tense, interesting film to really sink your teeth into. The story is completely unbelievable, at least the supernatural elements are, but it’s still really fun and well-paced, something I’m always thankful for in a Full Moon film. You’d think with a film this strong he’d have made more for them, but for some reason this is it. There’s gotta be a good story there, but that’s one I’ll probably never know. From what I’ve seen, this era in the company’s filmography is a sketchy one to say the least, but this is easily one of the top films from this group of years.

There’s also a pretty egregious use of CG fire, but again, I’m sure it’s all the budget would allow. In a movie like this I can forgive something of this nature (while still hating it), but in something with clearly more money on the table like The Expendables, I find it hard to stomach. Regardless of my nit-picking, The Dead Hate the Living is an incredibly fun low-budget horror film that should be able to transcend its roots and please most horror fans who are able to accept some low-budget shortcomings.

I’ll leave you with my two favorite lines in the film:
“Who would trash a room like this, and leave a TV on?”
I like this one because of the character’s shock that someone left the TV on. This place is FUCKED up, so the focus on the wasted electricity made me laugh.

“We’re not going to go to Hell for this, are we? I wanna be an actor, but I don’t want to damn my soul for it.”
Should be self-explanatory, but it’s a great line on the desperation the acting profession instills in many young wannabe stars.