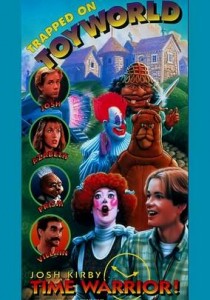 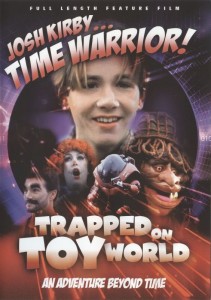 At the end of Part 2, Josh Kirby inexplicably teleports out of the time pod and finds himself careening through the tubes of time. In a surprising move from Full Moon, they actually address this WTF moment and explain it away with some bullshit techno-jargon! I couldn’t believe it. You gotta sit through about an hour of this film to get there, and by that point you’ve probably purged your mind of the events of Part 2 in an attempt to waylay neural overload, but it is nice to get closure on one thing in this series. Before any explanations come to pass though, Josh Kirby materializes out of the time tubes and into another wooded area. He soon runs into a robot Raggedy Ann rip-off named Annie who, after greeting him and exchanging some pleasantries, promptly asks him to unzip her dress. Seriously.

The toy world is just as creepy as it looked to be from the trailer, and is pretty much without any redeeming factors that might make me defend this film’s existence. The best part of this movie is probably the rehashed opening scene from Part 1 that replays in its entirety when Josh relates the fate of the universe to Annie and a giant toy bear I failed to get the name of. If that’s the best scene, then clearly the worst of the film would be the big dance sequence that follows shortly thereafter.

Josh Kirby finds Geppetto the toy maker and mistakenly mentions something about a show, sending Geppetto into a frenzy. He commands the toys to perform and perform they do. A painful song I’m assuming is called “We are the Toys of Toyworld” begins and it’s truly awful. The vocalists and the performers in the toy suits both exhibit the same lackluster, bored delivery and I really felt their pain. No matter how long the scene is for the audience, these fuckers had to hang out through what was most likely a few days of filming the sequence, hearing and performing the song over and over. For this, I salute them. It would take some iron-stomached individuals to hear this shit for that long. Just when you think the scene is finally over the music transitions into a slow dance and we are treated(?) to the toys doing their best ballroom moves across the dirt-floored courtyard of Toyworld. (For the record, “Toyworld” is not an entire world of toys, it’s Geppetto’s stronghold which bears the esoteric sign on its gate reading, “TOY WORLD”.) You’re probably thinking the slow dance gradually ends and our participants clap and congratulate themselves afterwards and we move on with the film. Nope! The music again seamlessly transitions into a more hip-hop influenced section, and then later still it moves into a final tango sequence which quite skillfully integrates the classic “Jack in the Box” song into its melodies. The scene is fuckin’ tough to sit through, but at least it ends on a high note with Josh Kirby jumping into a wind-up powered VW Bug and riding off into the sunset with Geppetto in the back seat. I’m probably biased towards this scene because of my love of VW Bugs, but fuck it, I’ll take what I can get after that dance-a-thon train wreck.

The guy that plays Geppetto reminds me a lot of Lloyd Kaufman, causing me to go into a Tromatic mental sidetrack every time he came on-screen. As I’ve mentioned in other reviews, I’ve come to think of these mental wanderings to be my brain’s coping mechanism with bad films, allowing me to think of things far more interesting than whatever is playing out on-screen and sometimes adding a much more interesting observation to the film than my conscious brain could come up with. No great abstract observations with this one though, yet another testament to how boring the film is. It bored both my conscious and subconscious brain. Anyway, I don’t mean to take anything away from Buck Kartalian (the actor that plays Geppetto) by making him into some sort of cut-rate Lloyd Kaufman. Kartalian is easily the best new actor in the film, and is a short respite to the cavalcade of awfulness his Toyworld has to offer. After all, he was in the original Planet of the Apes, so that should count for something. I suppose Sharon Lee Jones as Annie the robot is also good, but her character is so annoying that every time she came on-screen I tried my best to actively avert my attention to something else in the film.

Of course, the film couldn’t end without one more round of the abysmal dance number. I should have seen it coming in a film this annoying. Oh, and speaking of annoying, every time the film cuts back to Irwin and Azabeth in the time pod, Azabeth is chanting an inane, mind-explodingly annoying, bullshit chant that should definitely rank as one of the oddest choices made by a filmmaking team in the history of cinematic time and space. This whole series is needlessly stretched out into six films because of “Why make one or two good movies when you can make six half-assed ones?”, the Full Moon mantra. I suppose that isn’t entirely fair though, as the films do commit fully to the unique locations and really give it everything they can with the small budget they’re working with. This commitment leads to high disappointment if you’re not feeling the setting though. Regardless of any benefits of doubt, I can’t imagine anyone truly enjoying this one, even little kids who may have enjoyed the first two.

There was only one scene that genuinely grabbed my attention and made me laugh out loud in Josh Kirby… Time Warrior: Chapter 3, Trapped on Toyworld. Josh Kirby runs through a spindly forest (that reminded me of the swamp in Krull) as a troll gives chase. Josh jumps up and does a gymnastic move off of the fortuitously placed parallel bar in the haunted forest to thwart his enemy. The troll drops to the ground, shakes off the blow and starts to rise. He finds his sword embedded deep in his belly and instead of bleeding or caring, he simply breaks the blade off in his stomach and continues the chase. It’s a small bit of solace in a sea of annoying, boring toy shenanigans. Thankfully Part 4 looks about a million times better than this one, but I won’t hold my breath.

Here’s the piece of the movie with the “awesome” dance sequence.

Next week I need to take a Josh Kirby break so I’ll be watching a film that’s hopefully not as awful as Trapped in Toyworld was, 1987’s Creepozoids!