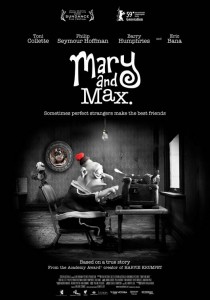 The above description of my path to watching the film may be too long-winded and superfluous, but given the subject of the film I find it relevant. Mary and Max is about Mary, a young child in Australia who lacks friends and picks a name at random out of a New York phone book to write a letter to. Max receives the letter and he’s just the type of person to receive such a letter. He’s a lonely, middle-aged man who suffers from a variety of neuroses and, like Mary, a lack of friends. They strike up a good pen pal relationship and we watch as their friendship ebbs and flows through the ups and downs of the two character’s lives.

So similar to Mary and Max, I suffer from my own neurotic tendencies, and am in constant battle with loneliness, depression and insecurity. I’m not as bad off as these characters, and I don’t mean to trivialize them or make this review all about me, but suffice it to say, I could relate to the two characters. The film also shares my very dark sense of humor, so you could say that this film and I are a match made in heaven. Mary and Max is incredibly well written for something that is essentially just two people writing letters to each other and then reading them. Each letter is revealing of the characters and the film’s plot; every one is engaging and full of life. That this much emotion and human drama can be packed into an animated film is astounding, and writer/director Adam Elliot should be highly commended for his work here. The characters that populate this film are all incredibly deep and real, a remarkable feat in an animated film. Some of this credit should be given to the voice acting. Philip Seymour Hoffman is brilliant as Max, and if I didn’t know it was him, I’d never know it. He truly transforms his voice into Max’s and it’s seamless. So many times when animated films cast big names to draw people in I am frustrated that a true voice actor could have done a better job, but here everyone is in top form.

And I haven’t even talked about the animation yet! Mary and Max is simply one of the best animated films I’ve ever seen, combining amazing motion control camera movements through miniature sets with emotive, wonderful character animation. The way sweat beads off of Max’s anxious face as the camera swings around him is amazing from a technical standpoint, just as it is amazing from a more human, emotional place. When these two schools of art are combined in the right way magic happens, and magic is definitely there in every frame of Mary and Max.

If I had to be critical of anything in the film, it is a rather slowly paced film and its humor will definitely put off some people. The humor is spot-on perfect for me, and when I say it’s hilarious it’s important to remember that my sense of humor is decidedly more dark than your average Joe. That’s not a real criticism though, so I guess my only legitimate beef is with the slow pacing. That’s not even really a problem either, as I thoroughly enjoyed every minute of the film and wouldn’t ask any of it to be cut. It works as is, and it’s just one of those movies that moves slowly and must be allowed to move slowly. After all, if I’m to gain anything from the theme of this movie, I can’t really sit back afterwards and tell it how it should be different. How very rude of me.

Mary and Max is a truly human, adult tale of two lonely characters and surprisingly it makes for one of the best animated films you’re ever likely to see. The humor and the subject matter make this one definitely not for kids though, so don’t rent this one thinking it’ll be a great family movie night DVD. If you are of age, and you find yourself pondering the nature of self and the inherent loneliness of humanity, then Mary and Max is your type of movie and you should definitely check it out. It’s as heartbreaking as it is hilarious, and a true joy to watch.