> Reviews by Author > Will's Reviews > Metalstorm: The Destruction of Jared-Syn (1983) 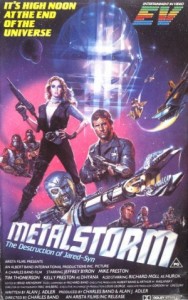 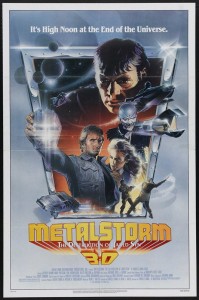 This is a movie I would have absolutely went apeshit for as a kid. As an adult it entertains wonderfully, but my enjoyment is a little more slanted towards an acquired bad movie taste than the simple joy of childhood. This does not diminish the experience, I just feel that I should make that clear before someone ventures unheeded into the wasteland and never forgives me for steering them wrong. As Metalstorm is a low-budget 80s movie, it doesn’t feature big stars and some of the FX aren’t as cool as they could be. This is the same year Return of the Jedi dropped and if you go in expecting something like that, good luck. It simply cannot hold up to that, but for what it is, it’s remarkably fun.

Richard Band delivers what is quite possibly his best score, filled with rousing crescendos played by a full orchestra. The main title could sit alongside any big-budget film’s music and stand tall. It reminds me a lot of Goldsmith’s excellent work for the Star Trek films. There’s also a little 80s-style future music that plays in the Cantina bar sequence when Dogen picks up Tim Thomerson. It’s a fun diversion to the otherwise orchestral music and helps the scene stand out while evoking that Star Wars Mos Eisley feel.

Charles Band’s directorial style feels even more solidified here than it did in Parasite, with the narrative coming through and driving the film. I know I said the plot details weren’t always handled that well, but in comparison to his earlier productions, Metalstorm is fuckin’ Citizen Kane. So with that in mind, it’s very interesting to see him develop his chops. This was the final film he made before creating the Empire International company that produced some of my favorites, and judging off the strength of this, it’s clear to see why he felt ready to start such a venture. One of the company’s first films, Ragewar AKA The Dungeonmaster, even reused some of the vehicles and featured some car chase scenes reminiscent of this film.

The acting and writing are probably the weakest part of the film, with Tim Thomerson and Richard Moll leading the charge in the good acting camp. The main guy Jeffrey Byron was also the lead in Ragewar and I remember him being a lot more interesting and charismatic in that film. Here he’s very boring and forgettable for the most part, the high point of his performance coming during a fight with Richard Moll in THE PIT! The writing is really as much of a reason to laugh at this movie as the acting though. Take a gander at this choice exchange:

Why screenwriter Alan J. Adler didn’t get an Oscar nod is beyond me!

Metalstorm: The Destruction of Jared-Syn is a great, low-budget sci-fi action film, filled to the brim with non-stop fun of all kinds. It’s only rated PG too, so it’s definitely kid friendly, as long as you don’t mind your kid seeing bandit cars careening off of cliffs in slow-motion and culminating in a glorious explosion on the valley floor. And who could possibly object to that? This one is blatantly trying to combine Mad Max with Star Wars, and honestly, Charles Band succeeded.

Next week, it’s The Killer Eye! Oh no!