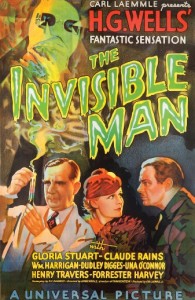 The Invisible Man does hold up under adult scrutiny, but not without its share of age-specific flaws that color the experience. For me personally, it was all in good fun and I enjoyed the hell out of the movie, but others may not be so forgiving and willing to have a good time with it. One sequence of events really bothered me, where the newsies sell a paper with the lead story being the invisible man’s crime, but then a couple of scenes later, the cops are only just then removing the body. Am I to believe that the newspaper industry was that fast? A minor issue that’s quickly forgotten in the fun of the film, but a more nagging issue is the theatrical acting style that always goes just a bit over-the-top to exaggerate emotions and key lines. This theatricality lends its share of unintentional comedy though, with the landlady screaming absolutely uncontrollably in the face of a small bit of blood & Claude Rains rolling his R’s and raising his fist with the best of them.

Where the film is not theatrical is in the filmmaking. The shot selection and editing aren’t quite up to today’s standards, but they showcase a director with an eye for what the camera is capable of. Especially worthy of note are three montages that come about midway through the film. The first features a cop giving a rousing speech about how they’re going to gather everyone up and hunt down the invisible man. The screen wipes left to right every few seconds to a new shot, showing things like cops riding motorcycles and hunting through the forest. The second montage features the message going out to the general public. The camera dollies up to a gramophone speaker at a dance party and we dissolve away into various scenes of everyday people listening to their radios of many shapes and sizes. The montage finishes by cutting back to the gramophone and slowly dollying backwards, completing the cycle. The third and final montage comes just after this as the public, now informed of the threat, lock their doors and windows in preparation for the invisible man’s arrival. This montage features quick-cut close-ups of things like lock bars being thrown closed and beams being placed into their door-blocking cradles. These montages are quite effective at conveying their intended messages and are my favorite aspect of the film outside of the special FX.

One last thing before I go, but be warned it spoils one of the major plot points of the film. Just jump to the last paragraph if you’re worried about such things. This is something that I find interesting to consider as it is a plot point that simply wouldn’t work in today’s world. One of the invisible man’s colleagues tries to uncover what happened to his friend and finds out that the invisible man had read some out-of-date books published in America before a key German study had been conducted and the findings published. This leads to the experiment going wrong and the movie we’re watching. While this misunderstanding could theoretically still take place today, the rise of the Internet would most likely cause this to be an unlikely occurrence. The invisible man (at this point still visible) would have googled something to the effect of “side effects of injecting monocaine” and the information that could have saved his life probably would have come up on the myriad Internet forums where people post such things and then argue profusely about them. Oh, but where’s the fun in an invisible man who rationally decides to abandon his wily scientific dreams because of a forum post?

The Invisible Man continues to be an exciting, well-made piece of cinema that fans of the classics and horror fans should definitely check out. Regardless of a few issues I had with it, it is delightful fun and contains some incredible FX that will continue to capture your imagination even today. If you’re in search of something classic and a whole lot of fun, look no further than James Whale’s The Invisible Man. And, it’s currently available on Netflix Instant for those still drinking that red Kool Aide.

And with that, Horrific October 2011 is complete! You can expect horror film reviews to surface here again next week.