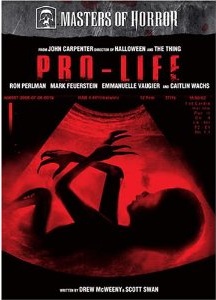 John Carpenter’s son Cody once again provides music, and this time it’s not so reminiscent of his father’s scores, but I mean that in a good way. Sure, it has the signature synths and piano that Carpenter is known for, but the melodies never reminded me of Carpenter’s fantastic scores of the past. This is a curse and a blessing as the music sometimes has a very generic horror feeling, but when it’s good, it’s fantastic. As the episode moves along, the tension rises and the percussion-driven synth score rattles on, rarely letting up its incessant rhythm. It works so well in heightening the mood and the tension, and coupled with his father’s eye for editing, it’s brilliant.

While the film is contained within one building, Carpenter splits up the players into groups and then cuts between their stories. They all begin the film together, but as it moves along, certain events force them apart. This leads to some of the best cross-cutting I’ve seen in a while, with each scene bursting with tension, leading into another equally exciting scene. They stack on top of one another as the thrills and the horror builds with them, all scored with the incessant synth percussion.

I’ve kept the plot of this one fairly vague because it’s just too much fun to spoil. The acting has a shit-ton of faults and some of the writing is equally groan-inducing, but the skill of John Carpenter and some killer FX from KNB help make this one of the best episodes of the series. It ventures into fantastically fun 80s camp territories that I haven’t seen outside of an 80s film in a while, and at the same time Carpenter shows incredible restraint in certain moments, keeping the film from being the bullshit torture porn a lesser director might make it. For these facts alone, it is worthy of my seal of approval, but don’t just take it from me. Give it a shot!