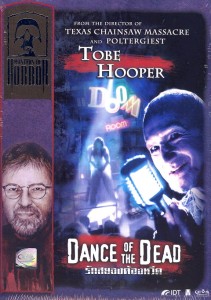 So far Showtime’s Masters of Horror is following an “every other” pattern, where every other movie/episode is shit. I’m only three shows in though, so perhaps it isn’t fair to call it a pattern. In any case, I had all kinds of red flags before I even began watching this one. I haven’t seen a lot of Tobe Hooper’s films, and what I have seen has all been drawn from his early work: Texas Chain Saw Massacre, Poltergeist, Salem’s Lot. If this episode is any indication, he’s lost that youthful spark he once had, constructing one of the most unenjoyable films I’ve seen in a while. It reminds me a lot of modern horror where the filmmakers do whatever they can to push the envelope, but do so without any motive other than to push the envelope. There’s edgy and interesting, and then there’s quasi-edgy and awful. I’ll give you one guess where I feel this one lies.

This is the kind of shit self-important teenagers looking to rebel from their Christian parents will enjoy, because it throws an endless assault of profanity, titties, and leather at you, without any rhyme or reason. The film is deliberately trying for the style over substance method, but it forgets early on that for this to work, the style must be flawless and intoxicating. Again, maybe if I was a rebellious teen. Adapted from a short story by Richard Matheson, Dance of the Dead further convinces me that either Matheson isn’t the genre visionary everyone makes him out to be or I just need to stop watching shitty adaptations of his stories and read some of the original source material. I should hope that his story was a little more coherent and meaningful than this piece of shit, because there’s very little here to care about. There is something of a good twist ending, but it’s not even enough to make me say “too little too late.”

This is by far the ugliest of the Masters of Horror episodes as well, only bettered by the horrid editing. Hooper continually uses a flickering effect to create the illusion of an interesting occurrence, coupled with shaky camera and quick editing. It is the ultimate sensory assault, and one that belittles the audience at every turn. I hated this one a lot more than Incident On and Off a Mountain Road, which doesn’t seem so bad when compared to this. If nothing else, I’m fairly certain that the series as a whole can only go up from here… at least, I sure hope so.