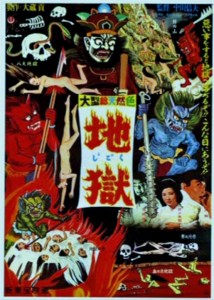 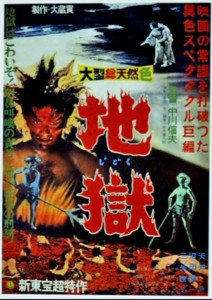 As such, I was left with my visceral reaction to what I was watching and the bare plot threads that weave throughout the film. The film is basically about Shiro, a young man who inadvertently causes (or is merely party to) a hit-and-run accident that kills a man. His friend Tamura was driving at the time, and he assures Shiro that everything will be OK. As time goes by, Shiro’s guilt rises and he again finds himself as an indirect cause to other deaths. There are moments and plot points that could lead this film down a more traditional path, but at every turn Nakagawa goes in the opposite direction, usually without an explanation. This can be a bit jarring for an unsuspecting viewer, but it’s not too hard to follow.

Anyway, as you can probably guess from the title the film ventures into the fiery depths of hell. This descent fills up the final half hour and it is by far the most interesting section of the film, while still being rather slow. Regardless of my indifference to a lot of things this movie threw at me, I have to give it credit for being ridiculously ambitious for the time and the budget. Nakagawa made this film for Shintoho, a notoriously low-budget, exploitation studio of Japan. To produce such a visual feast under such conditions is nothing short of incredible and my apathy shouldn’t take away from that achievement. Unfortunately for them though, Jigoku drove the studio into bankruptcy and it was the final film they produced.

I just can’t help but think that the film would be better, or more pleasing to me, if it was more narrative driven. Perhaps I’m missing the point of the whole thing, but most of the film plods along without any tension or sense of the narrative moving forward in any way. Sure, there are developments throughout the film, but they are more lateral movements than anything else. For instance, even while in hell, the tortured souls are getting together and reconnecting with each other, sharing secrets long-held. Possibly it is more tortuous to the soul to have all secrets revealed and then have forever to regret their transgressions and what they would have done had they known and all that. Hmm… maybe, but it still seems like an odd series of events. Especially when Shiro is caught in a sea of souls moving aimlessly through the underworld for eternity and he is able to break free to have a heart-to-heart with his fiancé. Shouldn’t he be completely unaware, or is it that fresh souls still search for resolution? This ambiguity allows the viewer to interpret the film, so in that way it is interesting, but it’s not exciting enough as a cinematic experience for me. 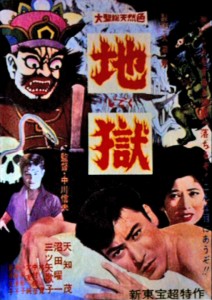 As for the horrors of hell, well, they’re pretty fuckin’ horrific, especially for the time. One dude has every inch of skin flayed from his body, the skin lifted high for the audience to see and then quickly moved aside to reveal a screaming head on a body composed of a beating heart in a rib cage and some bloody muscles. This is the most hardcore moment, but another when a person is sawed in two is up there. There’s honestly not a lot of gore by today’s standards, but what is here still resonates and looks impressive. It does look somewhat primitive though, and it got me to wondering when the standard “head on a fake body” technique was first used on-screen. I don’t know the correct term for the effect, but it involves a person laying under the floor with their head coming out of a hole, and the fake body on the floor looks like it’s connected to them. I may never know the first film to use this, but I imagine it was devised early on in cinema history. In any case it looks great in Jigoku and the beating heart is a fantastic touch.

I don’t want it to sound like I didn’t like or enjoy Jigoku. I did both, but I was expecting something a lot more exciting and horrific. It’s simpler than I thought it would be and is really more of a drama about guilt than a true horror film. The vision of hell created here is very interesting and unique though, and is probably the sole reason this film has survived as long as it has in the hearts of film lovers around the world. Nakagawa’s hell is surreal and haunting, yet relatable. The horrors come from a completely human perspective and as such, they are very believable. Oh, and the ending is absolutely perfect.

Come back tomorrow as Horrific October continues with another from Hammer, 1958′s Horror of Dracula! And next Wednesday, I’ll be looking at the illustrious film by Kaneto Shindō, Onibaba! That one’s been on my “To Watch” list for years!