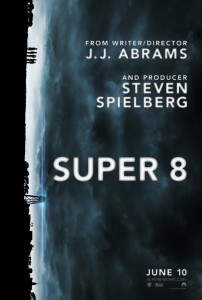 Joe, a teen distraught at his mother’s tragic death, rebounds by helping his friend Charles make a Super 8 zombie flick. They enlist the aid of their friends: Dude with the Braces, Dude with the Glasses & Dude with the Curly Hair. That’s the amount of character depth given to those characters, so it’s not worth my time to bother looking up their names. This could have been The Goonies for the modern age, and most likely it will be for those young boys watching it over the next few years, but for me the friendships felt forced and everyone except the two main boys were mere caricatures of what they could have been. If the film had actually focused itself on the kids and their adventure, perhaps we would have gotten to know them a little better, but J.J. Abrams just couldn’t decide which movie he wanted to make.

“Should I make the alien invasion film or the coming-of-age one? Maybe the crash-landed alien film would be good, or perhaps that nostalgic ode to the wonderful days of making movies with your friends. Oh, what the hell! Let’s make them all in one!”

If only he’d gotten someone else to do a polishing pass over the script they could have corrected some of these problems, but as it stands Super 8 is a jumbled mess of various Spielberg ideas. It’s like what Tarantino does, but without the personal signature and style that makes his films unique and interesting. Well, Abrams has lens flare but I wouldn’t call that much of a style. 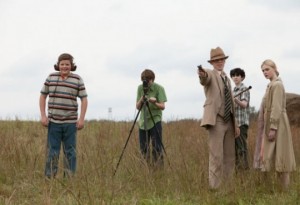 This is summer blockbuster writing at its absolute worst. Need a detail for a scene? How ’bout that one part from Close Encounters? OK, that will do nicely. The final shot of the film manages to smash the closing moments of both E.T. & Close Encounters of the Third Kind together for what is definitely a good shot unto itself, but it’s easy to get a good shot when you’re just copying! Super 8 is the cinematic equivalent of tracing, where the basics are similar, but it’s slightly off. I guess with Spielberg producing he’s essentially giving Abrams free rein to do this kind of shit, which leads me to believe he’s a bit more egotistical than I’d like to believe. It’s a sad state of affairs when a movie with a script this insipid is called original.

Consider this clever piece of writing. Early on in the film, Charles tells Joe that he’s talked this girl Alice into being the love interest in their movie. When Joe questions the decision, Charles responds that it’s not a real movie until it has a female character. Adding the scenes with her adds heart and makes the viewer care about the events. It’s non-essential to the actual story, but she will exist as an audience manipulation technique. And then without missing a beat, Abrams utilizes Alice’s character in exactly the same way in the real movie. Really? It’s like a grand subversive joke on the audience’s intelligence, proving once again that most people don’t give a shit about role equality in film. Not only that, but two of the three black people in the film were nearly-mute, unquestioning servants to the main heavy. Aren’t we past this kind of bullshit characterization?

When the words “old Spielberg sci-fi” come up, I get a wave of nostalgia. I watched a lot of his stuff growing up. Indiana Jones & E.T. were my bread and butter. Later in my teens I finally saw Close Encounters of the Third Kind and it blew me away. It was thrilling, mentally engaging, and thoughtful science fiction all rolled into one. Like a dream come true, everything I could want for in a film was playing out before my eyes. So when people throw around that Super 8 is recapturing some of that magic, I cannot rightfully stay away from the theater for very long. Unfortunately, it’s like J.J. Abrams just doesn’t get it. Evidently he watched those same Spielberg films but only picked up on the broad visual clues, missing the point of those movies he’s aping completely. They were not about reckless action and over-the-top special FX, they were human stories about people getting caught up in things much bigger than themselves. There was a sense of wonder, of true childhood joy permeating Close Encounters and E.T., but sadly there’s not much on display in Super 8.

Even if I put my curmudgeonly ways aside for a bit, the story is full of plot holes. The Air Force boxes the cubes, but one is missing because Joe took it. No one notices, or no one cares… but I know for goddamned sure if the military was transporting a fucking alien and his cubes, they’d know exactly how many of the damned things there were. A short time later we are told multiple times that the Air Force is taking plaster molds of the tire tracks leaving the train wreck. I guess that was for wall hangings on a General’s office, because they sure didn’t use it to track down who drove away from the site immediately after the crash. Both of these could have been used to instigate some sort of chase, some sort of adventure, but sadly they just fizzle away. The kids don’t even look like they’re enjoying making their zombie flick, with Charles the director barking orders like he’s an eighth-grade DeMille, and me wondering if they’re only there because he’s making them be there. Is this supposed to inspire kids to make films of their own or dissuade them? I did enjoy the hell out of that awesome nail-to-the-head zombie kill! That was the best part of the film.

Hey, if you enjoy this one, enjoy the hell out of it and don’t let me stop you. The acting from the kids is especially good, but personally I would have liked some memorable characters, a better plot and a healthy dose of old school Spielberg wonder in my “nostalgic homage to Spielberg.” I guess I’m just a purist. It’s ironic that in J.J. Abrams’ first non-series original picture he just took everything he loved about Spielberg’s old films and reused them. No thanks.