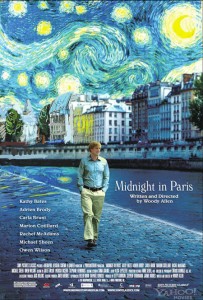 Owen Wilson plays Gil, a dead-end screenwriter looking to better himself through prose writing. What better place to put the finishing touches on his new work than the beautiful and magical city of Paris. He’s there with his fiance and her parents, who all seem to think he’s nothing more than a lunatic going through a phase before he returns to the real work that pays the bills. In order to distance himself from his fiance’s inane friends, Gil decides to go out on a walk through the lamp-lit streets of Paris. He soon finds himself in a wonderful fantasy that only a true nostalgic could appreciate. 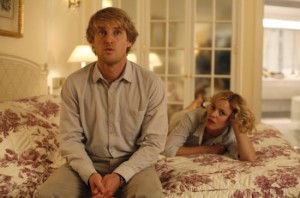 Midnight in Paris is an impeccably shot glimpse of the city, a perfect postcard inspiring travel bookings as we speak. I expect no less of Woody Allen though, so as great as it looks, I’d be shocked if it didn’t look this good. Watching a Woody Allen film these days is like going back in time thirty years, as his craft hasn’t changed much with the times. There were a few instances of moving handheld or Steadicam that seemed characteristically out-of-place for him, but it never felt wrong for the film. In any case, I found it especially interesting that as I felt like I was going backwards in time by watching a new “old” movie, Gil ventures into the past himself.

The fantasy elements of Midnight in Paris work astoundingly well and need little explanation. The clock strikes, the car rolls up, the audience is on board. Allen is wise to never explain it past these small details, as it would only get in the way of the enjoyment of the picture. As fun as the fantasy is, you really need to have done your homework beforehand, otherwise a bunch of it won’t make any sense. Luminaries of the 1920s come and go throughout these sequences, adding spice and magical touches unlike anything previously seen in an Allen film. I’ll admit that I’m not quite boned up enough to have gotten every joke, but I’m confident that if I did I would have enjoyed the film only more. This is a literature and art buff’s wet dream.

Where Midnight in Paris succeeds in creating both magical sequences featuring historical characters and modern-day traditional Woody Allen dialogue scenes between couples, it fails at being very funny. The film is enchanting and a joy to sit through, but there’s only one major moment of hilarity, and damn is it a good one. My mantra is that no matter the quality of the Woody Allen film, you can always count on one line, or one scene that is absolutely memorable and hilarious. Midnight in Paris has just the one, but the rest of the film is so mesmerizing and enjoyable that most people probably won’t even notice.

The musical choices are also expertly picked and placed. SPOILERS, but it’s all jazz. Since a soundtrack will probably never come out and you’ll most likely want to acquire that wonderful guitar tune that plays throughout the film, click here and you can buy the MP3 directly from Stephane Wrembel, the artist in question. It’s fantastic stuff. As great as the music is, Woody Allen truly missed a golden opportunity to yank the tablecloth out from under his audience by closing the film with Iron Maiden’s Wasted Years. The song and the film share what is essentially the same theme, that there is no “Golden Age” and that if there is, you’re living in it as we speak. A theme that I truly respect and agree with, Midnight is Paris is one of Allen’s best films to come out in the last few years. It’s nothing especially special, or anything that will garner any real movement come awards time, but it is one hell of an enchanting film.