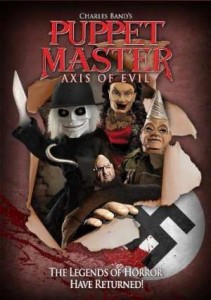 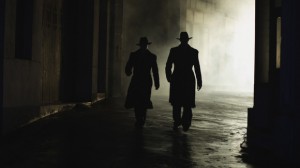 Alas, it does not and we are left watching some of the truly great bad acting that B-movies have to offer. My favorite was the Chinese actress playing an evil Japanese matron who had her voice overdubbed with an American actress doing a bad Chinese accent. I’ll let you ponder on that for a moment. This overdubbing isn’t nearly as flagrant and noticeable as the shit in DeCoteau’s Retro Puppet Master, but make no mistake, it’s awful in every sense of the word. It does manage to be hilariously bad at times and provide more amusement than almost any other aspect of the film. Everyone else’s acting is equally shitty, even if they aren’t being dubbed. Jenna Gallaher’s valley girl drawl did anything but suck me back to the 1930s, while Levi Fiehler’s incessant whining about being a 4F cripple was made somewhat palatable by his ridiculous delivery.

But let’s talk about World War II. So the first Puppet Master starts off in 1939. Toulon shoots himself. Puppet Master: Axis of Evil sets itself at the same time with our 4F hero Danny in the room next door when it happens. There’s a bunch of stock footage from the first film mixed in with reaction shots of Danny and I gotta say, this is one area where they did a great job. It’s pretty seamless if you’re not watching too closely, and someone not intimately familiar with the material would most likely never suspect any foul play. They also built a pretty convincing replica set of Toulon’s original hotel room! In any case, by doing this that means Puppet Master: Axis of Evil is also set in 1939, right?

A huge portion of the story revolves around Danny not being able to join up and fight “the Krauts and the Japs” overseas. In 1939. Right. It’s the ninth Puppet Master (tenth if you count the Sci-Fi produced Puppet Master vs. Demonic Toys abomination), so I won’t bitch too much about historical inaccuracies but it did bother me. At this point I shouldn’t be surprised, as little things like history or timelines have never stopped Full Moon from producing the story they want to make. One run through the Puppet Master series will definitely teach you that. So it’s inaccurate, so what. I’m not trying to learn history, I’m trying to see Tunneler tunnel into some dirty motherfuckers! That happens right?

It does! It’s not nearly as gratifying as it should be because they cheaped out on the FX, but Tunneler does drill right into the top of a dude’s head. Not a Nazi unfortunately, so that will have to wait until the sequel. Don’t act surprised, you knew one was coming. Even if this one didn’t end on somewhat of a cliffhanger, you knew it was coming. It’s Full Moon and for some reason, dudes like me will continue to watch any godawful mess with the Puppet Master name attached to it. If for nothing else, they need to do a sequel to allow the new puppet Ninja to get some quality screen-time and hopefully a better design. After all this time, toiling away at Full Moon Headquarters and all we get is half a shitty looking face obscured by a black cloth? I didn’t even know he was supposed to be a ninja until someone called him Ninja. Oh, that’s what that is!

For all its faults though, Puppet Master: Axis of Evil really isn’t all that bad. It’s more mediocre than anything else, suffering from that same disease that the last few films suffered from, the whole “puppets only at the beginning and the end” virus… although realistically the puppets only come out in earnest in the last twenty minutes or so of this. Despite this and the poor script and the shitty acting, the cinematography alone was enough to keep me engaged, if only for the novel fact that this was a Full Moon movie shot in a 2.35:1 aspect ratio! WTF? I thought I’d never see the day, and it’s impressive how much it contributes to the questionable watchability of this.

If you’re a fan, check it out. It does not have the gore, the suspense or the laughs you’re looking for, but it does have… oh geez, what does it have? Lots of cannon fodder for your own personal MST3K moments, that’s what, and that’s enough to amuse me. Where Demonic Toys 2 went the safe route and feels like a bad Full Moon movie of old, Puppet Master: Axis of Evil tries its best to venture out into new territory for the studio with a look and feel all its own. It doesn’t necessarily work, because it’s still a bad Full Moon movie of old, but I like that they are at least trying to do something inventive again.