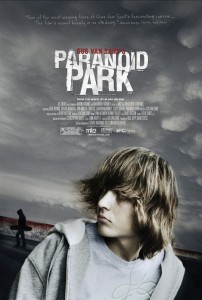 Alex and Jared are a couple of high schoolers who venture across town to check out the coolest skate park in the city, Eastside… better known as Paranoid Park to the people who skate there. Built illegally by the skaters themselves, Paranoid Park is the place to be if you want to be cool. One night some serious shit goes down near there and things will never be the same for Alex. It would be incorrect to call this a crime drama because of its plot, as it’s really much more of a study of a teen and his environment. Paranoid Park is an art film through and through, with tons of long, lingering shots and slow motion. This is both a strength and a weakness for the film as it seems like some of the slow motion is only there to pad the runtime. That being said, a lot of the slow motion adds a dreamy, lazy quality to the film, effortlessly slipping us into Alex’s lazy, teenage mind. We’re seeing the skaters at Paranoid Park through his eyes, dreamy and in awe. There’s also a lot of “skate video” type of footage with the camera on a skateboard following a skater around the park. As any kid interested in skating in high school will tell you, skate videos are the shit you watch and it seems natural for Alex to visualize in this way as well. This may or may not be the intention but it seems like a natural jump. 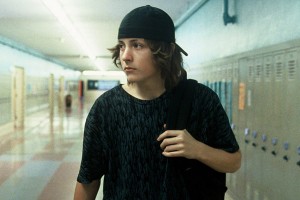 The film’s cast is comprised almost entirely of first time actors from the Portland area where the film was shot. There are definitely times when this shows through and you feel like you’re watching a high school-produced feature, but that too is part of the game. There’s a sense of reality with the unknowns that actors and a big budget could never truly capture. Even in the film’s most heightened moments, it all resonates of truth, with a quick moment of gore perfectly creating the shocking mood intended.

My girlfriend mentioned after watching that it reminded her a lot of Winter’s Bone, and that’s a spot on observation. In terms of tone and pace, the two films are almost identical but Paranoid Park has no thriller movie aspirations and is a much more successful film overall. They do share another quality, boredom. Despite my enjoyment of Paranoid Park it does move very slowly, especially the second half. By that point, it’s pretty clear what’s going on so maybe my brain just disengaged after it had figured it all out. The film is told out-of-order, in a jumbled mess of scenes, but it never specifically feels like a jumble. Instead it feels very natural as the scenes progress from one to the other, similar to Pulp Fiction, as the information is spilled out very slowly and deliberately. It’s a masterful progression up to that halfway point and then it loses a lot of steam and falls back on slow motion skateboarding shots. I can’t completely rag on the film for this, and you could argue that slipping further away from reality is Alex’s way of dealing with his massive problem, but what can I say, I got bored. Bored in a good way though, if that makes sense. I would have enjoyed the film even more if it was half an hour shorter, as I feel the dramatic impact would have been a lot stronger. At the same time, I think it’s fine the way it is. I’ll just have to stop arguing with myself and agree to have a dual, conflicting viewpoint on this part. I’m OK with it, if you’re OK with it.

Paranoid Park is definitely not a film for everyone, with its dreamy, slice of high school and skating, but for those that slip into its groove and feel the turmoil going on just below the surface, it will hit very well. Gus Van Sant does an incredible job with the material and if I didn’t know it was him, I never would’ve guessed. It feels like a small, no-budget movie made by a bunch of Portland kids looking to have a big career in the future, not a A-List director. To be able to completely ditch your Hollywood style and bust out a fully formed indie style like this suggests that he’s a lot better than I usually give him credit for. If art films are your thing, or you enjoyed the pace of Winter’s Bone, give Paranoid Park a chance.