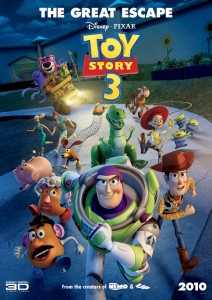 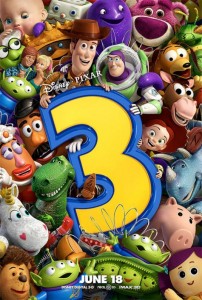 Many years have passed and Andy is now out of high school and heading to college in the coming days. The toys sit lonely in their chest devising plans to instigate play with their beloved owner, only to be thwarted when the teen quickly rejects them. When Andy’s mom asks him to separate his belongings into TRASH, ATTIC, COLLEGE, & DONATE piles, the toys immediately freak that they will be forever abandoned. A few Three’s Company misunderstandings later and the entire group find themselves at Sunnyside Day Care Center. They are welcomed by an elderly, cane-using toy named Lots-O’-Huggin’ Bear and Andy’s crew feel like they may have just hit the jackpot. Of course, it’s too good to be true.

There are thrills and laughs a-plenty in Toy Story 3. It is easily the most consistently funny entry in the series and the action is as exciting as anything in comparable live-action films. Graphically, the film is also the pinnacle of the series as you might expect, coming so far after the previous two films. The better fidelity of backgrounds, textures and lighting never draw attention to themselves though, and the film retains a very similar visual style to the first two films, so it never feels like you can’t go back and watch the older entries. Kudos to the guys in 1995 for achieving something that timeless with the first Toy Story!

I have to wonder if the eleven year gap between sequels was something of a calculated timeframe or if they just got busy making other things and kept putting Toy Story 3 off. I suppose it’s possible they were prodded into making it from Disney execs (giving the branding iron that adds the “3” to the title screen new meaning), but somehow I think that they always intended to go back and finish Andy’s story. While the toys are the definite focal point of the series for the audience, Andy is the toy’s focal point and he is integral to the success of the pictures. He is the driving force of the films, the goal is always to be back in Andy’s arms, providing whatever he needs to him.

[I’m going to spoil the ending after this point. You’ve been warned.] 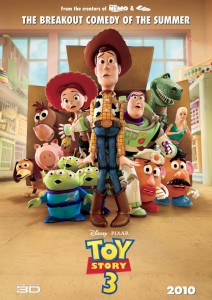 This makes the final, tender moments of Toy Story 3 incredibly touching and moving. Andy intends to put most of his toys in the attic, not needing them but not wanting to completely part with them. He has placed Woody in the college box though, feeling the strongest connection to him and wanting to keep him closer than the others. He just can’t let go yet. Woody then commits the grand act of sacrifice that Andy could not do himself, running into the Attic box, but adding a small note to the top before jumping in. Andy follows the instructions on the note and finds himself at the house of Bonnie, the child Woody stayed with for a brief time earlier on.

Andy sees Bonnie playing imaginatively with her own toys as he once did and he smiles, knowing that he is doing the right thing. He gets down on the ground next to her and one by one hands her the toys, introducing them with a brief moment of play. It’s so gratifying to finally see these toys get what they desire, one final instance of Andy Play before being passed on to a new owner. Andy never falters until he comes to Woody. He wonders how he got there and would have taken him back to his car with him, but Bonnie exclaims with excitement upon seeing “her cowboy.” Andy doesn’t want to part, but he must become an adult, he must take the first step to manhood. Toys are for children and you cannot hold onto youth by keeping your toys in a box in the dark closets of your lifetime. He makes Bonnie happy and gives up Woody in the ultimate tear-jerk moment of the film. It’s such a strong, simple statement on growing up and it works beautifully.

Toy Story 3 achieves the greatness rarely found in a single film, let alone a part three. It’s not only one of the best animated films Pixar has ever made, it’s one of the best films of the year. The early section of the film is a bit derivative with all the prison elements, but nearly everything else is an imaginative home run. Adults and children alike will laugh, cry and leave completely satisfied from Toy Story 3.