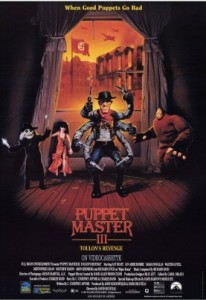 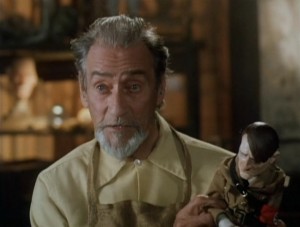 Due to all this setup, it takes awhile to get this one going, but it is interesting as Toulon’s mysterious backstory was the source of much intrigue in prior installments. Finally getting some hard facts (unless they get retconned in later films) is a welcome change. Anyway about twenty minutes in, Toulon finds himself in the backseat of a Nazi jeep riding down to be questioned at headquarters. He’s got other plans though when he lets Tunneler and Pinhead loose in the car to work their magic. Just like in Puppet Master II, Tunneler draws first blood by drilling through the driver’s seat and then through the torso of the Nazi driver. It’s awesome and instantly reminded me of that wonderful moment in Bad Taste when Peter Jackson chainsaws vertically through the head of the alien, goes inside his body and then comes out of his groin covered in blood and gore. It’s not quite that extreme, but it comes from a similar place and I approve.

The timeline of the film doesn’t really jive with the established world of the first two films. Things like Toulon killing himself in the hotel in 1939 at the start of Puppet Master, but here he is in 1941 Berlin, younger and very much alive. It’s not a big deal but it does seems like something of an obvious oversight. That being said though, at the time Empire produced the first film, they had no precedent of making extended series and with their budgetary concerns, I’m sure they had no plans to start one. As soon as the direct-to-video M.O. began at Full Moon though, all bets were off and who’s going to let a couple of silly technicalities dictate the films they are able to produce? Will the film’s audience care? I don’t, but I imagine a small sub-set of horror nerds devising dreams of alternate universes that allow for both timelines to be correct. 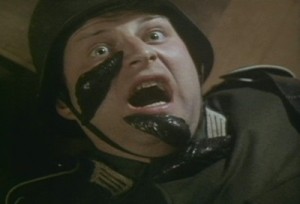 In addition to introducing the wonderful Six Shooter puppet, Puppet Master III also gives us the origin stories of two veteran puppets, Leech Woman and Blade. Leech Woman gets some more great screentime after her reduced role in Puppet Master II, stretching her face and regurgitating the leeches the fans were clamoring for. It wasn’t until about halfway through the film that I noticed Blade hadn’t made an appearance. Shortly after, I saw where they were headed and it doesn’t disappoint. His origin figures into the final kill of the movie, which is some sick, twisted shit. Pure sadism committed to celluloid, it looked like something more at home in a Clive Barker film than Puppet Master. It was genuinely hard to watch, but gives a great, memorable finale to a somewhat lackluster sequel.

I really enjoyed Guy Rolfe as Andre Toulon and Richard Lynch portrayed a cold-hearted Nazi villain with ease. This was released only a few months after Lynch’s turn as the villain in another Full Moon film, Trancers II, and he gives another slimy, enjoyable performance. The rest of the cast is pretty good too, with Aron Eisenberg filling the role of Toulon’s new assistant well, but a bit annoyingly. Of the three actors who have portrayed Toulon, I think Guy Rolfe is my favorite so far. William Hickey is the best actor of the bunch, but Rolfe’s Toulon is more sympathetic and likable while still maintaining the rage required to pull off a good revenge picture. There’s never enough tension in the filmmaking to successfully translate this rage to gratifying revenge, but regardless, Toulon and his puppets give the motherfuckers what’s coming to them in pretty memorable fashion. 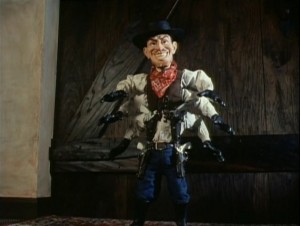 This is only the second David DeCoteau film I’ve seen, the first being his abysmal début Dreamaniac, and this is a marked improvement. Instead of mindless meandering, Puppet Master III moves well and features a number of good tracking dolly shots. The period sets and buildings are convincing, and the well-placed use of expository stock footage helps to sell a few of the larger scale scenes in public places. The puppets unfortunately get less screentime because of all the setup and this really hamstrings the film, as you and I both know that’s why we watch these kinds of flicks.

Puppet Master III is a pretty good follow-up to the series, adding another layer of depth to the puppets and Andre Toulon. It could have been better, but for what it is, it succeeds remarkably well. I won’t soon forget that final kill!

Next week I’m taking a Puppet Master break and will be checking out the 1989 Empire film, Arena! It should be a blast! Man Vs. Monster!