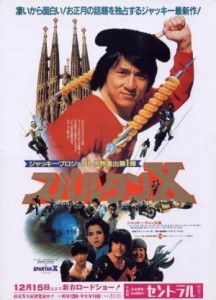 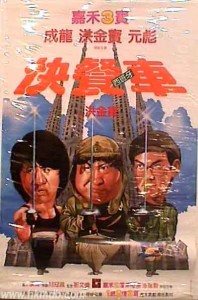 I remember staying up late while pulling an all-nighter during summer vacation and recording an excellent documentary off of pay cable titled The Deadliest Art: The Best of the Martial Arts Films. Some may remember it, as I’m sure it contributed greatly to the collective rise of interest in Asian cinema and fight choreography in the west. It was more or less my first taste of Hong Kong action films, and definitely the first time I’ve ever heard the names Sammo Hung and Yuen Biao. I knew Jackie Chan only from his sterile U.S. ventures, The Big Brawl and The Protector, and wasn’t too impressed. Up until this time I was pretty sure that Van Damme was as good as action films were gonna get in our day and age. Which is all the more reason why nothing could prepare me from the amped-up, on-fire whirlwind that this little documentary was gonna unleash on my cinematic consciousness. Seeing clips from Dragons Forever, Twinkle Twinkle Lucky Stars, and Eastern Condors that seemingly defied both the laws of physics and human limitations forever ushered in an insatiable hunger for real martial arts films.

The only problem is that you couldn’t find these movies anywhere. Your only alternative was to go the aforementioned 40-dollar bootleg VHS route. In the meantime I kept grinding down the magnetic heads of my VCR with repeat viewings of The Deadliest Art, content for now with brief snippets from these films… until one day my brother showed up with an inconspicuous clamshell VHS case with the words Wheels on Meals scrawled across it. 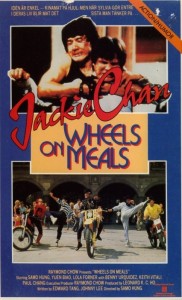 I think the thing that struck me most during my initial viewing of Wheels on Meals (and again now) was, martial arts aside, it’s just a fun movie. The comedy is top-notch, rarely falling flat. I think while many love to focus on Sammo’s martial arts prowess, he never gets proper due as a comedic genius, which is clearly his second love. In Wheels on Meals he almost intentionally downplays his martial ability in order to deliver more laughs. You gotta love the goofy outfits he sports too, from the oversized aviator hat with floppy earflaps, to the black tux with white linen gloves he dons while investigating a local watering hole. I think my personal favorite is the bouquet of flowers he wears in his hair while threatening strangers with a large butcher knife in an attempt to gain entrance into a local mental hospital.

Jackie and Yuen Biao are great here as well as expatriate cousins running a catering business in Barcelona, with Jackie actually taking a backseat and playing a more straight-laced role against Sammo’s jheri-curled clown. Yuen Biao is excellent as the sheepish nerd with his head in the clouds that falls for the beautiful prostitute turned baroness, played by former Miss Spain, Lola Forner (who would later return alongside Jackie in Armour of God). The trio is great and their genuine friendships offscreen make their chemistry onscreen an infectious pleasure to watch.

Some of Wheels on Meals’ most memorable roles are reserved for the heavies however, who remain two of the most talented foreigners to ever grace the Hong Kong action film. Keith Vitali was definitely an unsung hero of ’80s martial arts action films, having previously proved himself as Sho Kosugi’s main fodder in the stealthy masterpiece, Revenge of the Ninja. His attacks come fast and furious, and have never looked better thanks to the inherent benefits of Hong Kong martial arts choreography. An overwhelmed Yuen Biao has to rely mainly on acrobatics to even stand a chance against him. The real star in the action department however is the legendary, and vastly underappreciated Benny “The Jet” Urquidez. I will keep this as simple as possible, but his climactic fight with Jackie is the greatest on-screen martial arts battle I have ever seen. Period. I have endlessly combed through a vast library of kung fu films spanning the past 50 years in hopes of eventually discovering a battle that tops the one on display here. So far I have not. 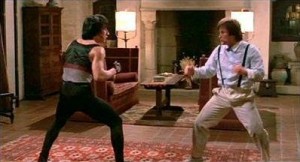 One thing I should mention before tying this one up is that this recent viewing was of the Cantonese version of the film, which I had never seen before. I have to admit that this is one of the rare instances where I think I would prefer the original English Dub, as the voice actors were surprisingly capable and seem to have had their fingers on the pulse of Sammo’s brand of comedy. It’s a minor gripe, but Sammo’s hammed-up German accent, Richard Ng’s classic Peter Lorre-infused delivery, and Jackie’s nasal twang are things I missed during this viewing of the film.

Maybe there’s a bit of sentiment involved here, but Wheels on Meals remains one of my very favorite martial arts comedies. Not so much a Jackie Chan vehicle, it is instead a showcase for the three brothers together as well as one of Sammo’s greatest efforts in the directors chair. Don’t miss it.