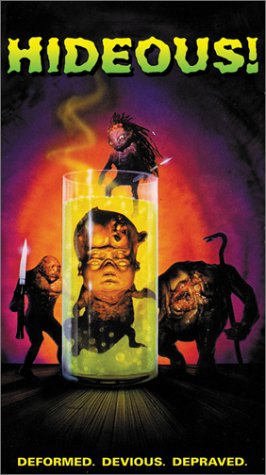 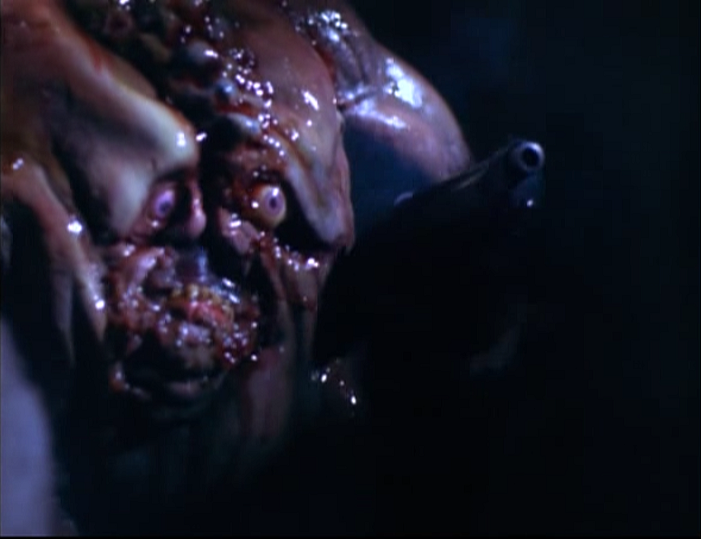 What most disappointed me about the film was that the creatures weren’t in it very much. I know these late 90s Full Moon movies have pretty small budgets but a few more bones would be nice. When the hideous mutations do come around though, they are hilarious. There’s four of them all together and they are, as you’d expect, a motley crew. There’s a double-faced giant-head baby that’s the brains of the operation, whispering a constant string of orders to his minions. Next we have the Porcupine Baby that uses his quills both to kill and to write baby-talk messages to the full-grown humans. Then there’s this large blob of a thing that defies description so I included a picture. When this blob picks up a stray gun and fires off a full clip at the humans, you’ve got comedy gold. Last but certainly not least we have Hulk Baby, a muscular brute that chews up most of the puppet screen time. He’s mentally unstable though, so he’s prone to bursts of crying. If any of this sounds at all enjoyable, then you’ve passed the test and should seek out the depraved trash that is Hideous!

Charles Band’s direction here is quite inspired, probably due to the fact that he had taken a few years away from the camera. There are lots of interesting shots mixed in with the standard full-frame facial close-ups, with such esteemed techniques as the “in-the-floor” style of shots Orson Welles pioneered in Citizen Kane and the “horizontal tracking with standard room objects in the foreground” shots that Kubrick used in The Killing and various other films to great effect. Sure, Band isn’t on their level, but it would be wrong to say that he’s a hack. He truly knows his way around the camera and is able to get what he wants out of the scenes. I would love to see what he could do with a real Hollywood size budget! 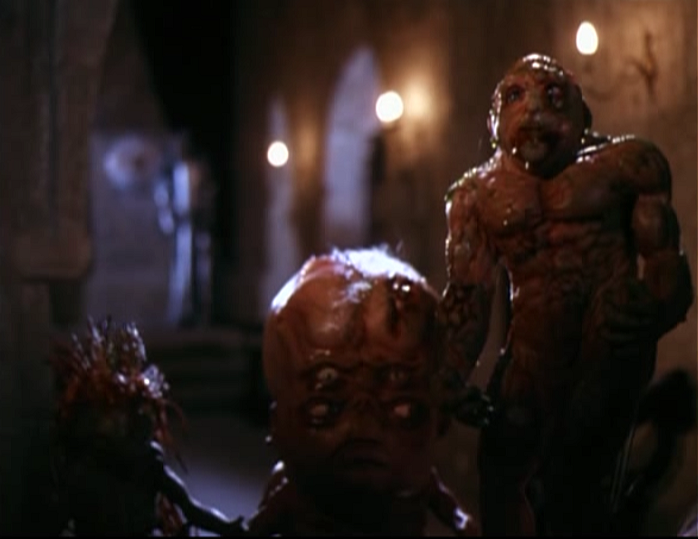 Hideous! is the 7,124th Full Moon movie to feature a castle, but surprisingly, I’ve yet to tire of the setting. I suppose it’ll get old eventually, but it’s such a staple of the films at this point that I think the films would lose some of their charm without it. When I start to venture into their newer films in the coming months, I’m sure the Romanian castle will make some more appearances.

So with the creatures relegated to the final act for the most part, a good portion of the fun needs to come from the actors involved. As an ensemble they work together very well, with Mel Johnson Jr. (best recognized as Benny the cab driver in Total Recall) and Michael Citriniti playing off each other as rivals incredibly well. I’ve never seen two characters argue about their genetic mutation collections in a film before, and if I ever see another scene similar, it will have a tough climb to beat the one seen here. I was somewhat disappointed that Rhonda Griffin was cast as the annoying dumb blonde comic relief, in stark contrast to her savvy librarian role from The Creeps. There’s nothing wrong with her portrayal of the character and it works overall for the story, I was just hoping for something more from her compared to what I got. 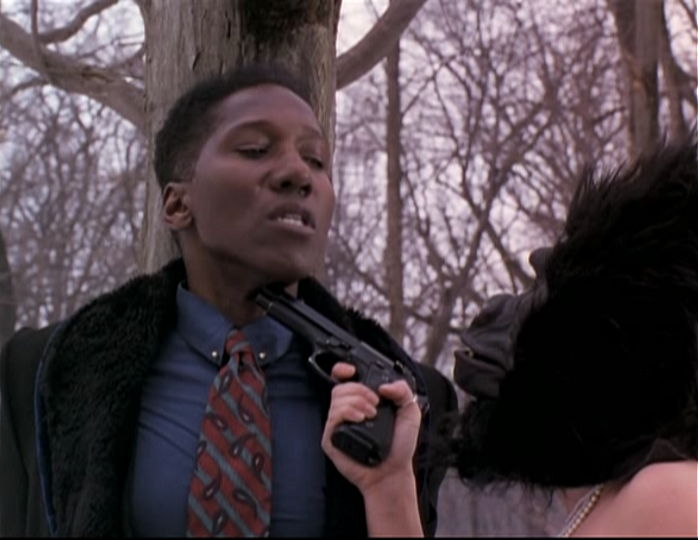 If nothing else, Hideous! will be remembered for its scene featuring a topless Jacqueline Lovell wearing a gorilla mask and leather hot pants as she steals the double-faced specimen from Mel Johnson Jr. on the side of a snowy road. Taste here is questionable, but any man watching cannot deny that the breast/gorilla mask combo is one of the most hilarious and watchable scenes you’ll ever come across. Jacqueline Lovell is an interesting actress as well, managing to both look and sound similar to Scarlett Johannsen. She even delivers her lines in a similar emotionless way. It works and there’s nothing really wrong with it, but it is interesting how Johannsen can achieve mainstream success despite this, while Lovell probably could not because of it. I have no facts to back this up, just theorizing.

In the end, Hideous! is equal parts hideous trash, hideous comedy, and hideous fun. There’s not much in the way of scares or gore, but that’s OK as the film more than makes up for it with strange, hideous situations and its gloriously hideous creatures. Some might call them crudely designed, but for me they hit the bullseye. Don’t expect much and you’ll have a hideously good time. OK, I’ll stop inserting hideous at every hideous turn now. Hideously recommended! I couldn’t resist!

Next Tuesday we go way, way, way back to a time before even Empire International existed, when Charles Band was producing 1970s science fiction. Next Tuesday we visit, the End of the World!