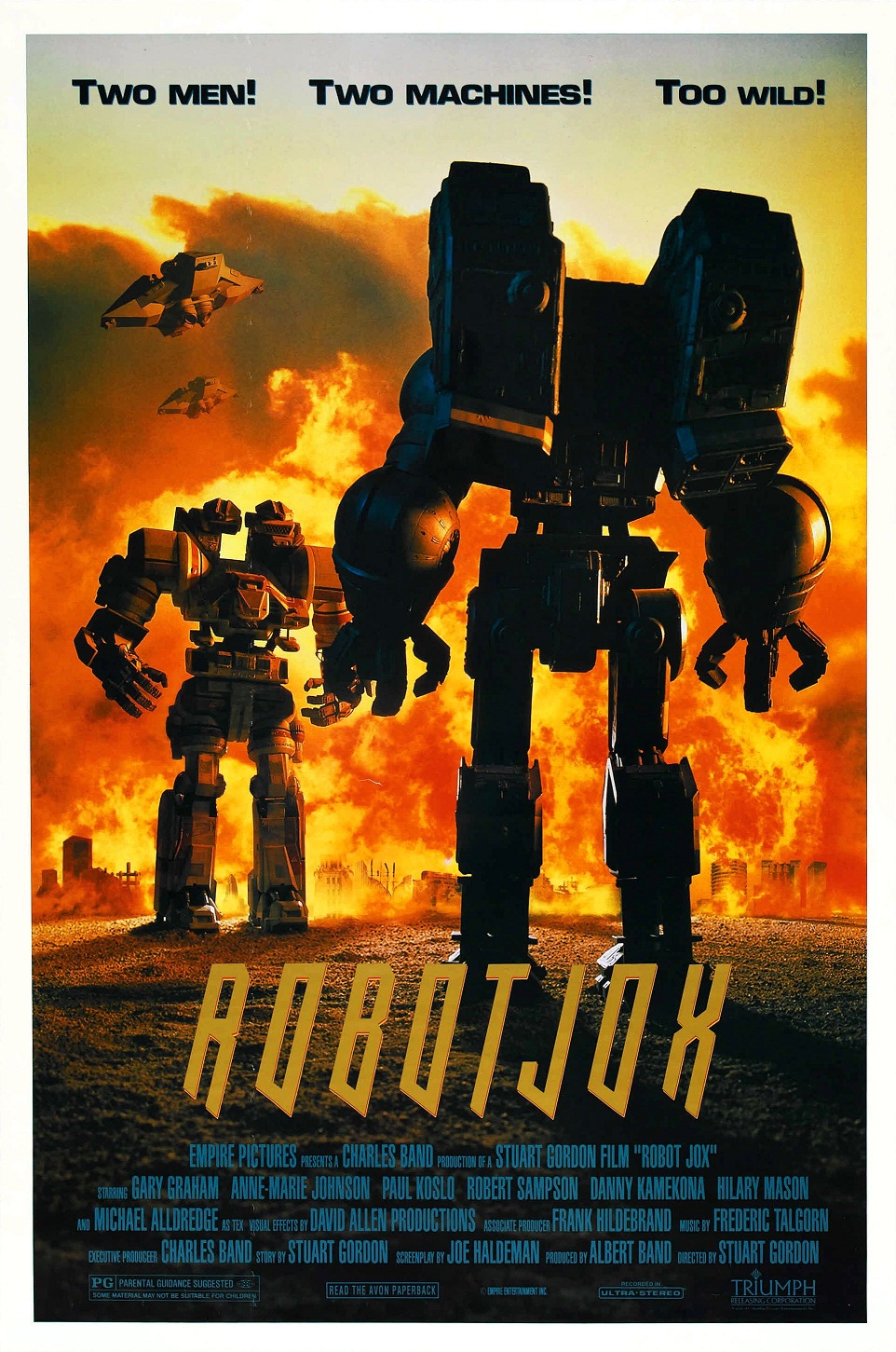 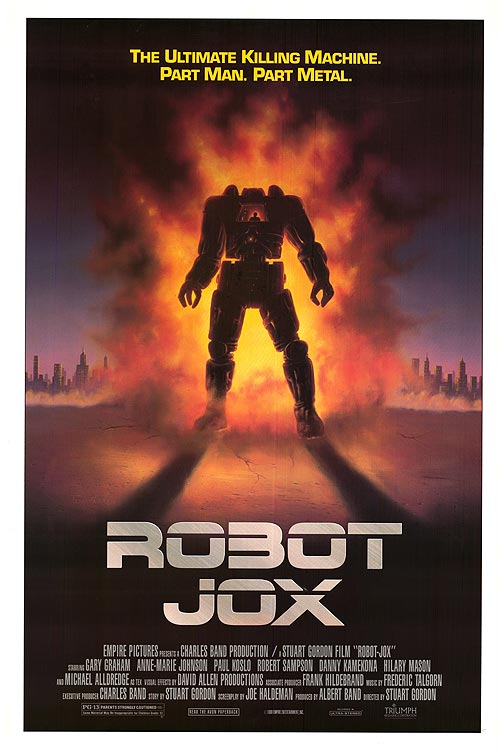 Robot Jox takes place sometime after World War III collectively hurled mankind into some kind of desolate, post apocalyptic wasteland. Nuclear war has since been deemed far too destructive and international disputes are settled via crazy-ass mech battles way out in the desert. The stakes are high in these duels, with entire states and sometimes even nations placed on the line… it’s the geographical equivalent to racing for pink slips. Nations pour their entire budgets into financing these colossal robots and the legalized gambling scene brings in massive revenue for all parties involved.

The film itself spends most of its time hashing out the drama between Human “Jox” and the new breed of genetically engineered warriors intended to replace them in the pilot’s seat. Achilles is the last of the old-school, human pilots. Fighting his tenth and final battle against a bunch of pasty, platinum blonde Russians. His mech is knocked back into the stands, where hundreds of innocent spectators are crushed. The match is declared a draw. Devastated, Achilles announces his retirement. He comes across one of the new DNA-spliced “tubies” named Athena, who gets his raging man hormones in a knot by essentially calling him a pussy who is ending his career on a technicality.

Athena is built like a supermodel, but has that whole sweaty and masculine Linda Hamilton / Brigitte Nielsen thing going on. She also sports a Kid N’ Play fade and knows karate. But Achilles obviously has a thing for her despite her unorthodox appearance and merciless tough girl act. When she is eventually chosen as his successor in the arena, he simply can’t take it anymore and finally returns to the ring and blah blah blah blobbity bloo… that’s all wonderful. If you’re watching a movie about giant robot wars I’m sure romantic angles and international diplomacy are probably the last things on your mind. Let’s get to the robots! 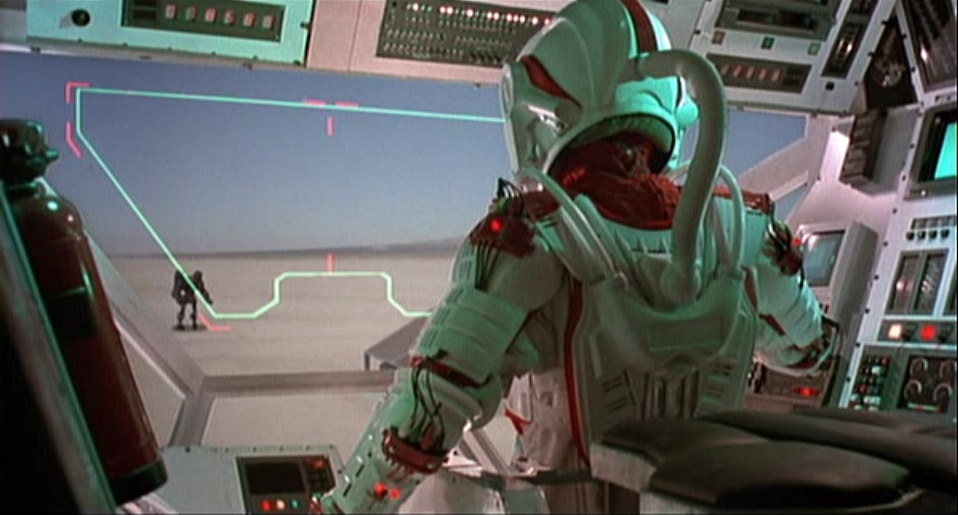 Is this really a low-budget B-movie? Sheeet, you could have fooled me. The enormous mechs are simply amazing! Special effects and camera trickery do a fantastic job of conveying the massive sense of scale on display here. Sure, there are the obvious matte shots and stop-motion animations here and there, but the models are so detailed and so natural in their movements that I had a difficult time distinguishing reality from movie magic more often than not. Anybody who argues the virtues of digital CGI over traditional movie models needs only to look as far as Robot Jox. I have heard that this is the film that eventually drove Empire Pictures to bankruptcy. I don’t know if those rumors are true or not (maybe Will can shed some light on this), but I would not at all be surprised, as it’s pretty obvious that no expense was spared in making these mammoth robots completely believable.

I have to take a moment to note the brilliant use of sound as well. The lumbering behemoths sound like stacks of iron girders pounding against each other during battles. Folding arms and bending knees are punctuated by loud metallic screeches which sound like the worn brakes of a school bus or an eighteen wheeler. Be sure to crank it up (at least during the battles) because this one rocks! 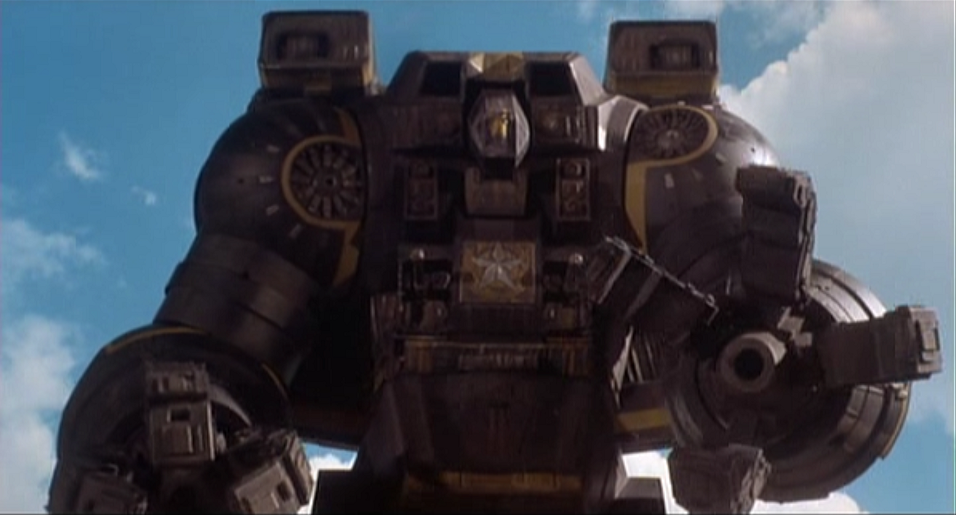 While the fights aren’t exactly fast-paced, they are entertaining as hell to watch. The mechs are loaded with enough heavy weapons and goofy tactical devices to keep things moving along at a brisk pace. Rocket powered fists, heavy machine guns, homing lasers, and devices that temporarily render your opponent blind are all fired off here. The final battle even ups the ante, taking the fight off the ground and into Earth’s orbit! If you spent your younger years lapping up shitty episodes of Voltron after school, you’ll no doubt be in heaven here.

If this is what the future holds for mankind, then sign me up… Load your nukes, plunge the world into chaos, and let’s start working on our big fucking diplomacy-settling robots. The future of combat is now. Let’s do this shit! Crash and burn!