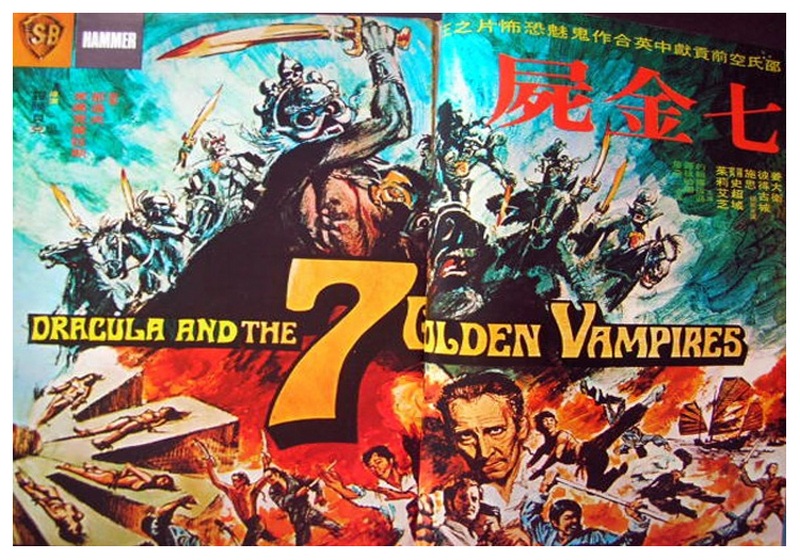 The Legend of the 7 Golden Vampires starts with a monk laboriously walking through the forest. He stops to rest and notes the immense castle at the top of the farthest hill, his destination. With a knowing smile he continues on his path, eventually (read: one dissolve later) walking down the steps into the crypt of none other than Dracula himself. He begs the famed undead lord for help resurrecting the seven golden vampires that were once strong enough to rule his village. He gets no quarter from Drac, but Dracula’s no dummy and he sees an opportunity to cheat death once again and walk the Earth like the rest of the population. He inhabits the body of the monk and ventures back to the village in China.

The first half of the film follows something of a Seven Samurai / Three Amigos storyline where David Chiang travels to the big city to recruit Dracula slayer Van Helsing (Peter Cushing) to help him rid his village of the vampiric scourge. If you want to break it down and split hairs, this could be considered the more Hammer-dominated section of the film. When they take to the journey, the fights begin and the second half has a much more Shaw-influenced atmosphere. Both halves of the film feel less than what they should be though from a fan’s perspective. The fights, while fun, aren’t anywhere near what the Shaw Studios are capable of and the Gothic horror elements are all fairly minor. It’s too easy to be critical with a film like this though, with so many odds stacked against it, so let’s try to focus on the good for now. David Chiang and Peter Cushing both represent their respective studios admirably in their roles. The supporting cast is good as well and the film is very well shot. The color cinematography pops off the screen in a sea of colored lights and brilliant set design. The set for the vampire’s lair and day spa virgin bleeding chamber is especially good, and reminiscent of the high quality set design the Shaw Bros. are known for. 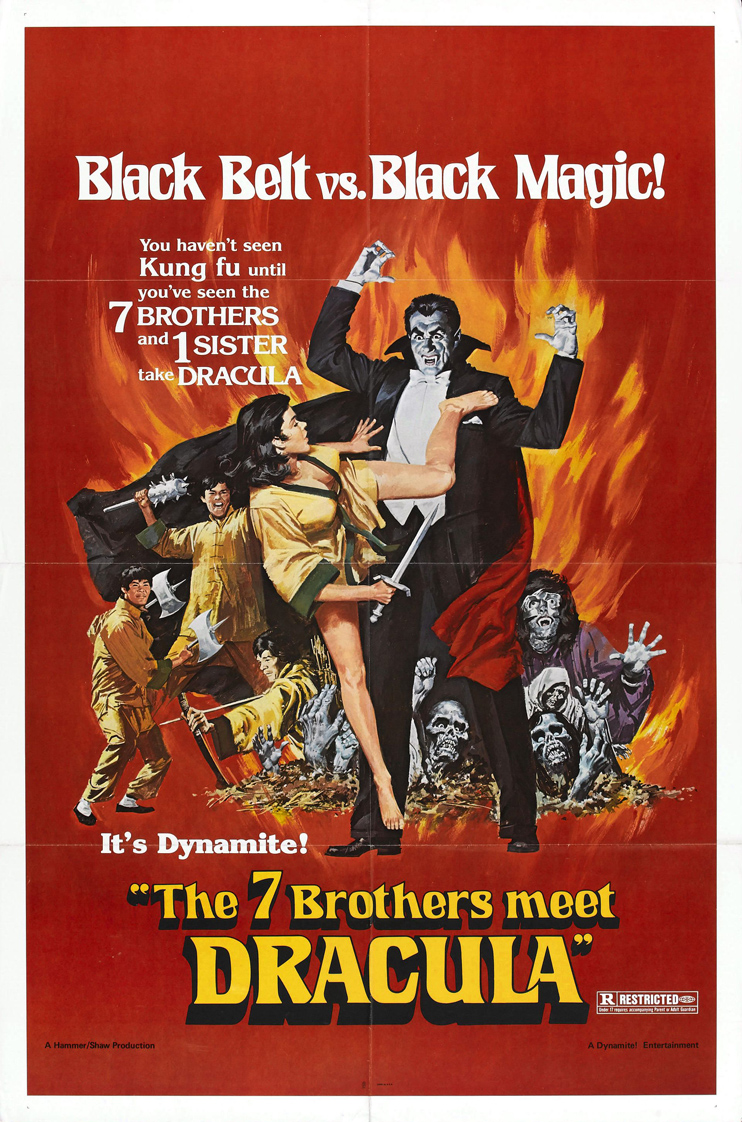 The story might be overly derivative and simple, but the legend itself is pretty fun as it plays out. Don’t expect it all to make logical sense, but in this kind of a film it’s more about throwing a bunch of fun shit on-screen and hoping people come out in droves. The Chinese vampires are a sight to behold, powered by large golden bat medallions and wearing golden masks that obscure their wrinkled skin. The vampires also have the power to raise the dead, allowing for some killer scenes of dudes in zombie makeup busting out of graves. It’s so fun that they do it a couple of times during the film.

My main problem with the story is the same problem I have with most culture clash East & West movies. The Chinese brothers who come to Van Helsing for help are totally capable of slaying their own vampires without his help, and in fact, they pretty much do just that. Westerners just can’t hang with the fast-paced action of the East, and they wisely don’t have Van Helsing doing any kung fu fighting. Instead he’s along for the ride in more of an advice role, telling tales of how he defeated Dracula, but even these aren’t that much use as Van Helsing himself states that Eastern vampires are different and won’t necessarily react in a similar way to the vulnerabilities of the European vampires. This proves true and further illustrates why the Westerners in the film are unnecessary additions to what would otherwise have made a pretty kick ass Shaw Bros. vampire tale. As I’m coming at this from the Shaw camp though, I wonder if hardcore Hammer fans feel the opposite way. In any case, it is a perfect example of how two big studios teaming up isn’t always rainbows and sunshine.

I don’t want to sound too negative as I did enjoy the movie pretty well for what it was. It’s definitely not great, and it leaves a lot to be desired, but you can’t fault them for not bringing out all the stops for this one. There are tons of vampires, special FX & fights, all brought together with quality production values and a sure camera. Despite all the elements being in place though, it just fails to fully connect with its audience. I do have the feeling that this could grow on me as a guilty pleasure though and I think this is the kind of movie that would play a million times better on the big screen, so hopefully I’ll get that chance one day.