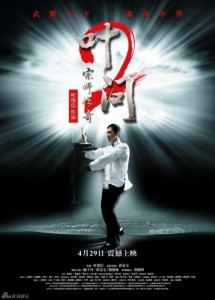 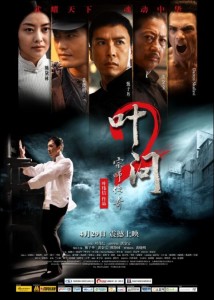 The film begins where the original leaves off. Ip Man is in Hong Kong now, struggling to make a living by teaching a few rowdy, hot-headed teenage kids kung fu. There are a few unwritten rules in Hong Kong though. In order to teach, you must prove your worthiness to stand among the upper echelon of the local martial arts schools. This means of course, that you must fight on a wobbly tabletop against a bunch of aging kung fu masters. The fight itself, which features some pretty fantastic action via Lo Meng and Sammo Hung, lapses into full-blown cartoon mode as the subtle wire-work of the first film is tossed aside for more pronounced acrobatics. It’s not bad at all, but it definitely takes you one step further away from the intimacy of the original film.

With the Japanese out of the picture, the occupying British serve as the foreign bad guys this time around. In the proud tradition of white guys in Hong Kong movies, that means we are treated to some of the most obnoxiously hammed-up overacting known to man. Forget about the equipment in Ip Man’s kung fu school, these guys are the real wooden dummies. I don’t know who is in charge of English language casting in Hong Kong, but why do they always seem to pick the guys who feverishly contort their faces while reading their lines about 80 decibels higher than everybody else? Maybe it’s a necessity in order to bridge the language gap, but it instantly makes me cringe when I see a whitey up in my Hong Kong movies. On second thought, if the goal was to find actors who are the best in their field at presenting white people as loudmouthed, arrogant, and overtly racist assholes, then they have succeeded admirably. 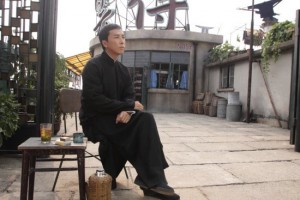 When chronically asthmatic Sammo gets beat to death in a Chinese boxing vs. Western boxing match against musclebound douchebag “The Twister”, Ip Man decides to once again stand up to the foreign bullies and become the courageous face of the Chinese people… Wait, haven’t we done this all before?

Herein lies the most blatant issue with Ip Man 2. When it’s not pilfering moments out of Rocky IV, it’s shamelessly looting its own prequel for plot points and characters. Everything, from the ultra-evil foreign fighter to the sellout Chinese interpreter is a rehash of what we already saw in the first film. Not only that, but the original handled everything with much more tact and finesse than the second-hand offerings here. I can see why Donnie Yen has ruled out any chance of appearing in a possible Ip Man 3. He must have gotten some pretty bad vibes off of the brazen profiteering going on here. At least the actor portraying Ip Man seems to have a shred of respect for the man. 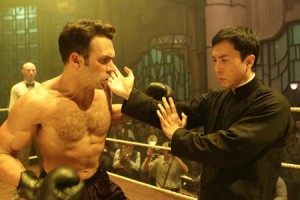 Before I wrap this up, I’d like to make a comment on the series as a whole. I have no problem with the rampant jingoism and Chinese nationalism going on here. As a longtime fan of Hong Kong films, this is just a part of the entire package, and it has never really bothered me. But I can’t help but think how Ip Man himself would have reacted to these incredibly fictionalized accounts of his life being passed off as legitimate biographies. Maybe he wouldn’t have minded being used as an icon for Chinese pride. Maybe he would have just laughed at the whole thing. Still, it’s an interesting thought.

With Hong Kong now caught knee-deep in the throes of an Ip Man frenzy, we have Wong Kar-Wai’s version of the Wing Chun master’s story to look forward to next in the coming months. Now that should be very interesting, to say the least.