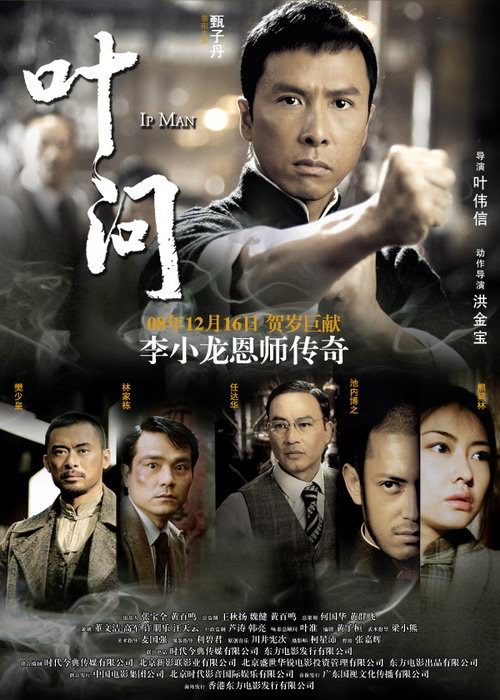 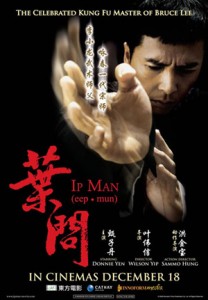 The film tells the story of legendary Wing Chun master practitioner, Ip Man, who later went on to teach Bruce Lee among other notables. The focus here is on his earlier days though, opening in the mid-1930s when the city of Foshan has become known for its abundance of quality martial clubs. The townspeople regard Ip Man as the top master but he refuses to have a school of his own. One day, the dapper Master Liu (Chen Zhihui) comes to challenge him to a private duel. The moment of truth is now. The first fight is on. Will it disappoint?

Not in the slightest. Donnie Yen’s Wing Chun is flawless and displays an effortless fury of will that easily bests the lesser Master Liu. The fight is one of my favorites in the film and is incredibly well-shot and choreographed. I was worried that Ip Man might focus too much on the drama and not be as much of a fight film as I wanted, but the film completely succeeds on both levels. The fights are numerous and are all excellently performed and staged. The man himself, Sammo Hung, choreographed the fights so I suppose I should not be surprised at how amazing they are. Donnie Yen proves why he rose to the top of the Hong Kong heap, as his martial arts have only gotten better in the years I have been away from his films. The other fighters are all equally capable as well and prove to be a good match for him. Hiroyuki Ikeuchi is quite good as the main villain and I especially enjoyed watching Fan Siu-Wong’s fight through the Foshan martial club masters. He’s come a long way from Story of Ricky! 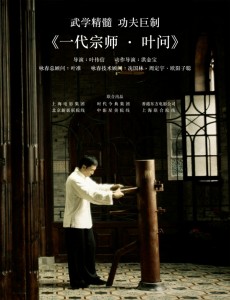 After this lovely, rousing opening, things turn sour for the Chinese as the Japanese invade and take over the country in the Second Sino-Japanese War. The film takes a turn towards the dramatic, but it’s never boring or unwelcome. Due to the really well put together opening, the viewer is invested in these characters so the drama works well, conveying deep emotions and the trials of the characters. You can’t help but get sad when these lovable characters get thrust into such a bad situation, persecuted for no apparent reason. At this point, it becomes clear that the Japanese are the villains of the movie. This struggle against the Japanese serves as something of message to Chinese audiences to be prideful and to defend their country against foreign invaders who do not respect Chinese culture. I have no idea how accurate this story is, but it seems to be pretty one-sided and exaggerated in spots, so I’m willing to bet that it’s a fictionalized, movie-version. While I’d love to believe that China is truly like the China portrayed in martial arts films, logic steps in and I have a hard time completely buying into that fantasy. Regardless, the movie is incredibly well done and probably one of the best written kung-fu pictures of all time.

The acting across the board is excellent, with Donnie Yen providing a cool, collected Ip Man that shows power and compassion. If you’re any kind of Donnie Yen fan, you owe it to yourself to check out what is easily the best acting performance I’ve seen from him. The rest of the cast stands up to the bar set by Yen and they are all a big reason why this movie succeeds so well. I cannot say enough good things about the film, it is truly a new classic to be added to the kung-fu hall of fame. Ip Man completely blew me away. It works as a fight film and a serious dramatic work, something many martial arts films aspire to, but very few can achieve. I didn’t think it was possible, but Ip Man is everything you hope it to be and gives Iron Monkey a serious run for its money as my favorite Donnie Yen film. If you’ve never had the pleasure of a true Hong Kong martial arts picture, this would be a great, recent place to dip your feet. You’d be in for a real treat.