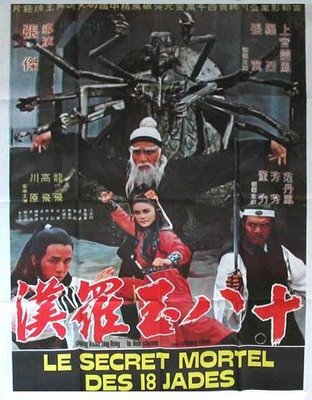 Not to say that the film is without its merits. If you are willing to accept this film for what it is, a string of mildly entertaining kung fu scenes hiding behind the guise of a half-assed, unfairly convoluted mystery, you will walk away with at least some decent payoff. You get Polly Kuan in a wobbly balancing act as she duels Philip Ko atop giant, rolling iron balls. You get Shaw Bros. small-timer Lee Jan-Wa being seduced by a trio of beautiful temptresses who turn into killer witches within the blink of an eye. And you get an unskilled, phony swordsman con-artist getting kicked in the balls and crushed by a door for no reason. These moments serve as brief rest stops along the headache-inducing, poorly presented hack-job of a journey this film presents.

When I read the plot summary of this film I was intrigued because it sounded like a wu xia detective story come to life. Being a huge fan of detective fiction and genre-benders in general, I was more than ready to watch Polly Kuan and Lee Jan-Wa run around in the woods playing Ming-Dynasty Philip Marlowes as they tracked down the mysterious killer of a respected kung fu master. I am willing to give a little more leeway than normal to murder mysteries in terms of plot, because untangling the web of clues is part of the fun. However, the piss-poor execution here makes any attempt to unravel the mystery pretty much useless. The film tosses like 20 characters and about as many plot points at you in the span of the first half-hour making it damn near impossible to follow along. Seriously, you’d have to be cracking algebra like a fucking android in order to keep up with this shit.

When the film is at its strongest is when it’s tossing random challenges at our two heroes like stacked levels in a video game. At one point, a rogue Buddhist monk flies out of nowhere to challenge Lee Jan-Wa to see which of them is more successful in chopping down trees with their bare hands. Immediately after, a soft-spoken nun challenges Polly Kuan to balance atop a tall stalk of bamboo for as long as possible without falling. Polly wins of course, but only after talking mad shit to the quiet nun who tries desperately not to break from her meditative state. If the film gave us 90 minutes of this stuff and nothing else, it would fly leaps and bounds above what was ultimately delivered.

The ending is halfway decent even though it contains about three plot twists too many. I got the impression that there was a genuine attempt to tie this jumbled mess together in a semi-respectable fashion. The martial arts are a little uneven, but these guys were at least smart enough to save the best stuff for the end. Other than that, Polly Kuan gave a lively if sometimes irritating performance, Lee Jan-Wa made for a decent male lead, and Lo Lieh was good in his 10 minutes of total screen time.

It may sound like I ripped this movie to shreds, but that’s not entirely the case. There is a good film buried somewhere under here. Shoddy direction and meandering screenwriting just unfortunately obscured it. This would actually be a decent candidate for a remake, which I almost never support. With a little tightening and a lot of trimming this film could actually live up to its original intentions. Perhaps then, Eighteen Jade Arhats, we could finally have our requited love.