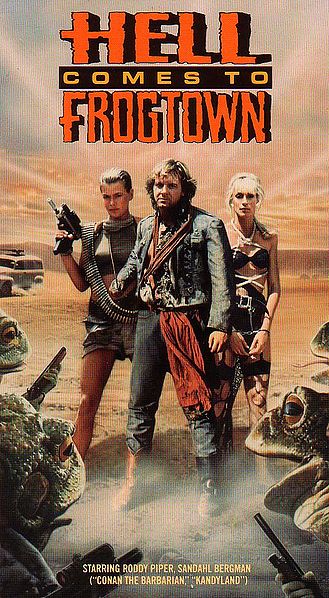 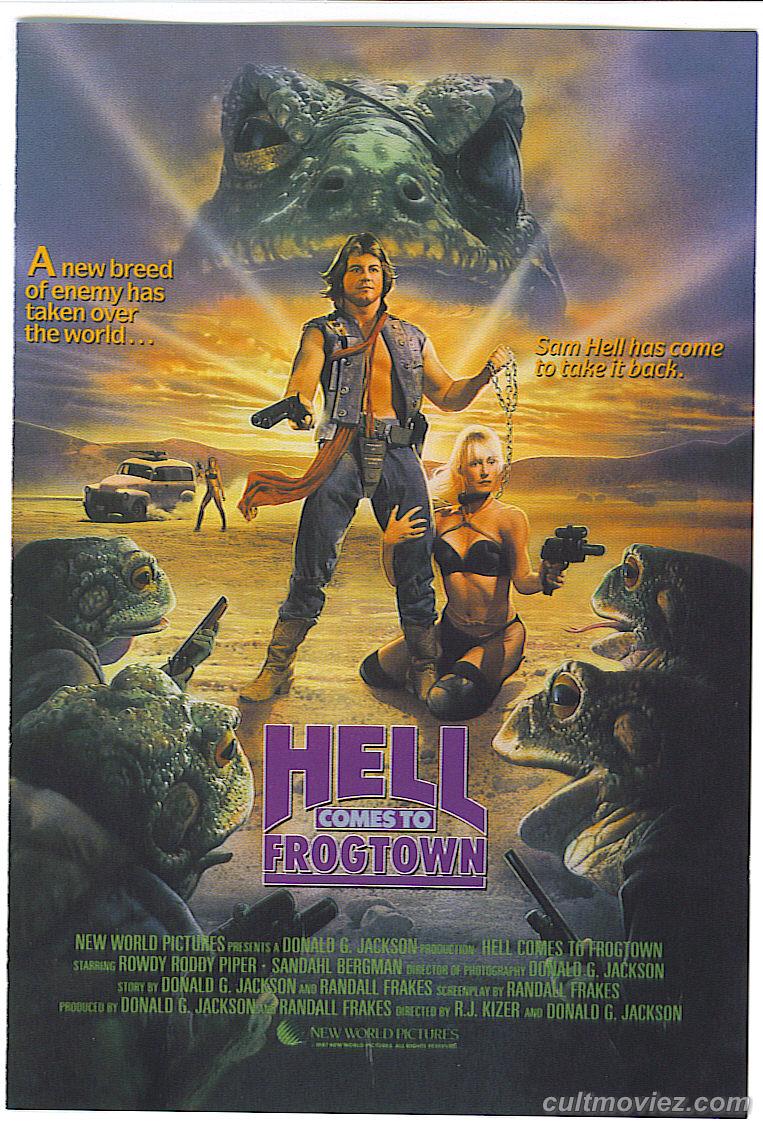 By this point, 10 minutes into the film, the viewer has a pretty good idea what they’re in for. The road to Frogtown is a little long, but the film picks up once they enter the town proper. The filmmakers allude to man-size frogs throughout the early section of the film with a few well-placed ribbits, but it isn’t until the second act that they appear. And boy when they do, they are great. I don’t know about you, but there’s something to be said for a guy wearing a man-sized frog costume that just spells awesome. The great things about these frogs is that they are varied in their facial structure so they’re always interesting to look at. Some look like a traditional frog, some look more human/frog hybrid. My favorite frog, pictured below, sports a large, black eye patch. It’s the little things in life that bring so much pleasure.

The film spawned three sequels but unfortunately none of them feature Roddy Piper. I’m interested to check them out, but without Piper it’s unclear whether they will be worth it. I really enjoyed his work in this and They Live, as one-dimensional as it may be. His physicality is used well in both films and his over-the-top acting is always amusing to watch. The final battle with Commander Toty recalls shades of the epic fight between Capt. Kirk and the Gorn from the Original Series of Star Trek. Both fights were shot at Vasquez Rocks, CA, a popular sci-fi filming destination near Los Angeles.

Frogtown sells the post-apocalyptic world better than most others I’ve seen in the genre, including major studio Hollywood fare. It’s quite impressive given the small budget and is achieved mostly through careful shot selection and a script that truly understands the villainous nature that should inhabit this kind of world. The plot is incredibly far-fetched, but it’s so much fun that you’d hardly notice. The acting and directing are definitely better than expected. I had heard lots about creator Donald G. Jackson and his reputation for “Zen Filmmaking,” a technique where he would work without a script and film the ideas of the moment. This was actually a little before that time though, so this is a more traditional film. 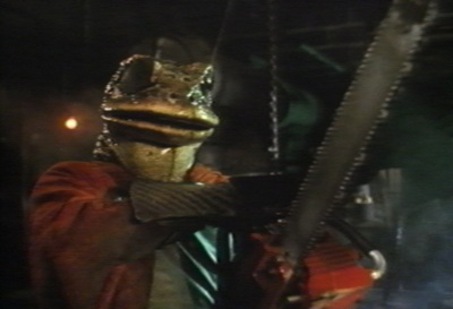 For those familiar with recent video games, watching Hell Comes to Frogtown will instantly remind you of the brokedown wastelands of the Fallout series, or more specifically, Fallout 3. If only the Ghouls were Frogs the two properties would be remarkably similar. One has to wonder if the game’s creators are fans of the film.

One of the film’s most lasting scenes comes near the end of the second act when Spangle must perform the Dance of the Three Snakes for Commander Toty. The actual dance is something short of erotic, but I’m not a frog so the dance wasn’t really targeted at me. Commander Toty and the three snakes, on the other hand, were thoroughly engaged. The filmmakers stop just short of revealing the full monty, leaving me just a bit dissatisfied and wishing this was a Troma release. They at least would’ve had the balls to go all the way with it. Overall, this is one of the better B-Movie sci-fi offerings from the ’80s and succeeds on many levels. The frogs look great and Roddy Piper is the perfect choice for the lead. Recommended for genre fans.