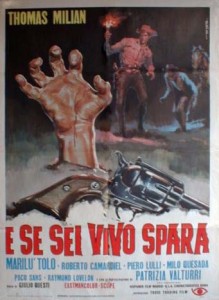 Click the play button to listen to the Django Kill…If You Live, Shoot! theme while you read!

If Anthony Steffen’s Django was the grim reaper, then Tomas Millan’s “Stranger” definitely invokes the image of Christ. Later in the film, he is even stripped down to a loincloth and roped up, arms apart, in full crucifixion-style. To call him an avenging angel would be a pretty apt description. Even the gold bullets he uses can almost be seen as a weapon of purity.

Meanwhile the gold-toting outlaws make their way to a small town on the edge of the desert, the aforementioned “Unhappy Place.” It becomes obvious fairly quickly that there is something off about this town. A naked boy stands alongside the road, and an insane woman is seen behind a window biting the hand of a would-be assailant. It’s all too quiet, but the gang is in dire need of horses and has no choice but to bargain with the townsfolk. They walk into a saloon and after a cold reception are soon pegged as wanted outlaws. The rabid locals waste no time in organizing a lynching to purge the unwanted criminals from their town. 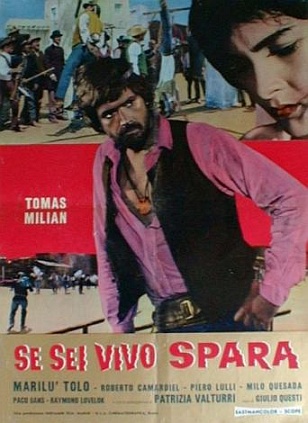 The violence here is ugly and brutal. Far from the stylized violence of most spaghetti westerns, this film depicts it in a stark, borderline awkward fashion. The outlaws scurry around and quiver like cornered rats as murderous townsfolk string them up slowly, shoot them point blank in the head, and hang them in the middle of town, dripping with blood. From this point onward Questi delivers several scenes of brutality, devoid of anything resembling honor and heroics. And he doesn’t skimp out on the blood and gore either. When The Stranger finally rides into town just in time to riddle the gang leader’s body with gold bullets, greed-driven townsfolk swarm around the injured man and begin digging into his stomach, ripping through flesh and warm blood in an attempt to gouge the valuable slugs out of his torso. I couldn’t help but think of a young George Romero watching this scene and using it as inspiration for the zombie mutilation sequence years later in Dawn of the Dead.

The Stranger decides to hang around in search of the gang’s gold, which has fallen into the hands of Templar and Alderman, two local business owners who had hidden it amidst the chaos surrounding the lynching. Also vying for a piece of the treasure is Mr. Sorrow – a shady greedhound who leads his own gang of black-clad, homosexual cowboys. In one of the film’s darkest moments Mr. Sorrow has Templar’s pretty-boy son kidnapped, only to be sized-up and gang-raped by the insatiable outlaws. The boy wakes the next morning, disheveled and disgraced, before calmly walking behind a wall and committing suicide.

The film only gets progressively more bizarre and twisted from here on out. A torture scene involving iguanas and vampire bats, an alcoholic parrot, and a jihadist horse all work their way into the equation. The stranger falls in love with a psychotic, emotionally disturbed woman and in another graphic display of unhinged violence, one of his Indian friends meets a blood-soaked end as he is scalped alive by depraved townsfolk.

Giulio Questi must have seen some pretty heavy shit in his time. This is not the type of film you crank out under contract to fill a weekend moviehouse full of excited cowboy fans. This is the product of rage, disgust, and contempt. And although the wild imagery no doubt helped propel this film into cult status, there is an unsettling vibe lurking unseen beneath the surface of it all. Every character seems haunted by their own inner demons, teetering precariously on the edge of madness.

As fresh and audacious as this movie is though, it ultimately suffers greatly due to serious pacing issues. When it’s not throwing wacky moments in your face it gets downright sluggish as it waddles along at its own languid pace. Ultimately I have to chalk this one up as an unfortunate missed opportunity. All of the insanity and savage violence would have been far more welcome had the film itself been much tighter.

Which is not to say you should avoid this one. When this film hits, it hits hard. It definitely has its own song to sing. Fans of westerns, horror, and purveyors of cinematic weirdness will all find a lot to love here. It’s ultimately just a matter of sorting through the mundane to get to the good stuff, kind of like plucking bits of gold from a bloated belly.

[Editor’s Note: Well folks, that ends our two-week look at Django and his clones. Hope you’ve all enjoyed it as much as we have! We’ll be back in a couple of days with a recap post where we give some general thoughts on the films overall and Jasper and I will each have our own ranked list of the films. Should be up on Sunday.]