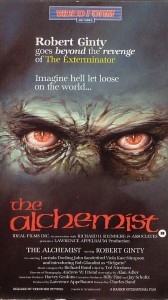 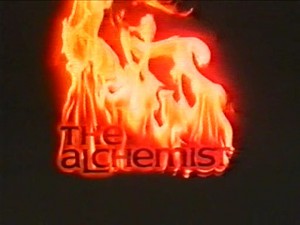 It’s now 1955 and Lenora (Lucinda Dooling) drives along a mountain road. She is struck by a vision of the woman from the prologue and a demon. Soon after, she picks up a hitchhiker and a much stronger vision comes upon her. She blacks out and almost drives over the cliff. Lenora receives these visions because of the efforts of an old woman who tends to the cursed man-animal. She performs spells and rituals to try and lift his curse and has unknowingly brought Lenora’s soul into their predicament.

First thing, the music is fantastic! Charles Band’s brother and frequent collaborator Richard Band provides a haunting, creepy score. It is by far my favorite part of this movie and sets a great, dark tone right away. I’ve liked the small selection of his other scores I’ve heard, but this easily rises to the top of the pile. I’ve included below a sample of the main title music for your enjoyment. Just imagine the fire in the picture to the right moving in slow-motion and changing colors now and then for the full effect. It’s really a shame that the film doesn’t live up to how awesome this music is.

The acting is bad, but watchable for the most part. It’s a low-budget horror movie so if you’re really into that sort of thing, you come to expect a different level of acting from the players and are okay with that. For all its flaws though, the film is technically sound and well-made. Charles Band makes the most out of what he’s got with confident shot selection and editing. It ultimately fails to excite completely because the middle section of the story gets a bit drawn-out and tired due to its relative similarity to the Dracula tale, but the film is still worth watching for genre fans. 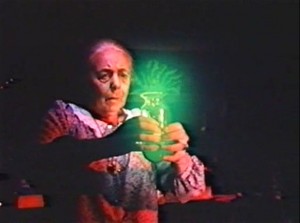 The Alchemist isn’t all that gory, but when it is, they don’t mess around. One scene where the cursed man-animal kills a deer shows him digging his hands around inside the bloody, gnarled carcass and it looks real and convincing. Later on, dudes in cheap foam latex masks and leather jackets get killed and Band chooses tight close-ups of the wounds to showcase their final, bloody moments. It’s trashy but effective, making for some choice moments of nasty fun. The non-gore effects are great too. The old woman crafts a glowing green potion that features some great animated FX. The finale of the film is simply fantastic, featuring a shimmering hellgate and a red-sky surreal vision of that other land down under that looks surprisingly believable and realistic. And when the villain gets his, it is satisfying and gory, just as it should be. There’s even a great time-lapse decomposition, one of my favorite effects from 1980s horror films. It’s not as good as the one from Evil Dead, but it’s still damn good.

In the end, this is a good, low-budget horror movie but it does have its boring spots. It’s only 78 minutes but it feels a lot longer. The storytelling gets a bit confusing at times, but it adds a level of mystery to the film as you are trying to figure out exactly what’s going on. As much as I enjoyed watching this, it seems like a TV movie at times, but probably would have had more impact at TV episode length.