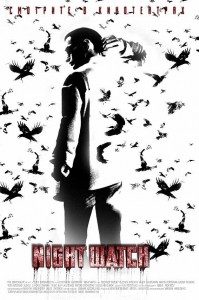 I don’t know how big the Russian fantasy film genre is, but I’ve now seen my first. I wish I could come out and say, “Wow, that was amazing,” but unfortunately my response is a lot more tempered than I hoped it to be. This is a movie that doesn’t really know where it wants to go with itself and thus I was left confused. That’s not to say there’s nothing good here. In fact, there’s quite a bit that is fun to watch and works well. It’s these moments of fun that make the movie frustrating because they work as a sort of carrot on a stick being held out in front of you, driving you on, but you never get the carrot.

The film is based on a 1998 novel by Sergei Lukyanenko. I haven’t read it, but from what I understand, the novel is broken into three parts and this film is based only on the first part. Just judging from the basic ideas presented in the film, I can imagine that this book is pretty good. I’ll probably check it out at some point, so I hope that this story is better on the page. To try to briefly summarize the film’s murky narrative will be a challenge, but I will do my best.

Okay, so it sounds like every other fantasy action picture when you break it down like that, but really it is 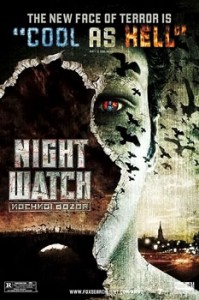 more original than all that. The film opens with our main character visiting an elderly woman who possesses supernatural powers. The man asks her to kill the unborn child in his wife’s womb after he is told by the woman that the child is not his. Things get nasty and some shape-shifting cops bust in and break up the black magic before the child is killed. This opens the character’s and the viewer’s eyes to the world of the Others. Light Others fight to protect humanity and keep Dark Others in check. Dark Others are basically vampires that cannot drink human blood because of the Light Other cops. I was hoping for some serious throw-downs between the two sides but it remains fairly civil throughout, with a lot of politics and glaring at one another.

The film is quite flashy but not really in a traditional Hollywood sense. It’s still annoying, but at least I haven’t seen every one of the tricks used here a thousand times before. If you’ve seen and enjoyed Timur Bekmambetov’s first US feature, Wanted, you will most likely enjoy this and its sense of style. Unfortunately, I’m one of the guys who turned Wanted off after 30 minutes, so I’m not really in sync with this guy. In addition to the flashiness, the use of handheld cameras and quick-cut Michael Bay editing here is atrocious and frustrating.

The film does have its share of great visuals though. In one scene where the main character fights a vampire, he ends up blasting him with some light, instantly frying him. The vampire falls back into a chair as he turns to ash and the force of his fall sends the chair rocketing back. The chair strikes a sink on the other side of the room and the vampire’s ashen head explodes outward. It’s a fun scene and it looks great. This is one of the more conventional scenes but it’s also one of the few scenes that works really well. You won’t hear me say this much, but this film actually could have used some more convention. 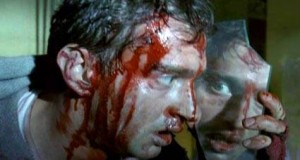 As I said before, I’m sure the convoluted plot works well in the novel, but something seems to have been lost in the adaptation. The film feels like it’s a sequel to an earlier film, jumping directly into events already in motion. It takes a good while before you get your bearings and are in tune with the film, at which point it’ll take a sharp left and lose you again. I did enjoy watching this for some reason though. It was boring in spots and hard to understand throughout, but the story wraps up very, very well, setting up a potentially kick-ass sequel. Is it as awesome as it could be? Find out tomorrow with my review of Day Watch!

One for the money, two for the show, three to get ready, now go Djan-go! Don’t forget! A Fistful of Djangos, our look at eight classic spaghetti westerns starts three days from now on Monday July 5th! Be there!