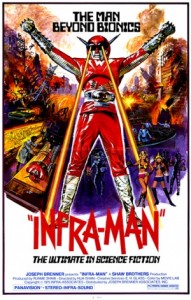 I hope you have your Xanax on hand because this film is a veritable assault on the senses. Bright neon filters, firework-laden explosions, and piercing laserbeams are the norm here and make this film at times resemble a Gene Davis painting more than anything that has come out of the Shaw Studios. Add to that mix lots of fights between guys dressed in silver Evel Knievel stunt suits and the aforementioned army of rubber monsters (with names like Mutant Drill and Witch Eye), and you know you better have 911 on speed dial if you have a weak heart.

When an evil, whip-crackin’ ice age princess named Elzebub awakens on Mount Devil (don’t bother trying to find that shit on Google maps, I already tried) and starts raining hellfire and fury down on Hong Kong, a team of kung fu fighting science guys are called into action. The head professor calls his lead pupil, Rayma (played by The Killer’s Danny Lee) down into his secret lab to show him his lifelong work – the Inframan Project; a human volunteer with extraordinary abilities would be augmented with wires, capacitors, biological hormones and bionic implants to create the ultimate weapon. Without hesitance Rayma volunteers for the project and work begins. What follows is a simply awesome sequence detailing the transformation process as Rayma has all kinds of crazy shit clamped and wired to his arms and huge syringes of food coloring are squirted into his body.

But Elzebub has some secret weapons of her own and let me tell you, once I saw all of these fucked up spider-lobsters, slinky-headed robot warriors, devil-horned hairball creatures, and tentacle-growing plant monsters I was nearly shitting my pants in pure ecstasy knowing that I would get to see Inframan fight each and every one of them. Too often, these films tend to skimp out on the monsters, instead hoping to dole them out over the course of several films. But not this time… there are literally at least a dozen of them, plus the requisite cannon-fodder henchmen.

And the fights! Inframan is armed with exploding jumpkicks, solar rays, fire bomb darts, and thunder gloves which fly from his hands into enemies. The monsters have acid attacks, heat lasers, and deadly fire breath, and that’s just scratching the surface! I am a grown man and here I am, hardly able to contain myself. I could not even comprehend being a kid in the Hong Kong of the ’70s and going to see this movie on the big screen. I doubt girls, school, or Jesus would mean much at all to me after witnessing an experience of this magnitude.

The Shaw Bros. are already well regarded for their beautifully detailed set design. This film features hands-down some of the best work they have ever done. I am a sucker for crazy-ass science labs, and this is by far one of the best I have ever seen. You have the obligatory wall of bright buttons and steaming test tubes, but you also get a cool rotating control panel and glowing orb things all over the place. The best is saved for Elzebub’s Mount Devil headquarters though. Her and the monsters pal around in a secret cave that resembles a hollowed out dragon head, inside are giant skulls and a serpent headed fountain that spills water into a steamy pool.

And wait – who was that I saw? Yes, hot off the heels of our Bruceploitation film fest we have Bruce Le in a supporting role! The Shaw Bros at least had the class to let him fight without making him act like Bruce Lee, but that still didn’t keep them from naming his character Lu Xiao-Lung, an obvious play on Bruce Lee’s Chinese name of Li Xiao-Lung.

You definitely can’t go wrong with this one. For those of you who admire the Shaw Bros for their kung fu films, be sure to add this one into your Netflix queue. You’ll find out soon enough that they were much more than a one trick pony.