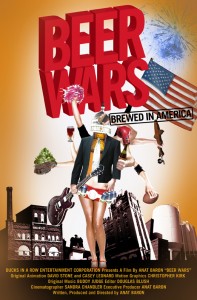 Beer Wars seeks to informs its viewers on the fundamental differences between big business beer companies like Anheuser-Busch and small, independent breweries like Dogfish Head. It starts out on the right foot, entertaining and communicating the facts. About halfway through, it loses a lot of steam as the facts run out. At this point it becomes a mixture of random scenes that don’t go much of anywhere and don’t shed any light on the subject. Lots of hitting the “independent breweries are better” nail into the ground.

I’m already on-board with buying local and off-brand brews, so this film also has a quality of “preaching to the choir” for me. All the scenes with Sam Calagione, founder of Dogfish Head Brewery, are great though, as he is a very honest, likeable fellow. Just the type of guy you’d want to have some grog with. He seems to have great fun running his business and apparently hasn’t lost sight of the dreams that compelled him to open a brewery in the first place. I don’t want to be too negative though, I liked the film. I just thought that it wasn’t as focused or concise as it should have been. The film is definitely better than that train wreck of a poster.