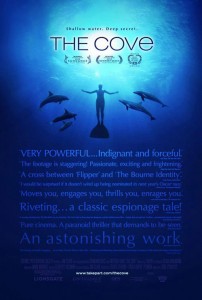 The Cove is an interesting documentary. It seeks to expose the fishing practices of the Japanese village of Taiji, specifically the capture and killing of dolphins that goes on there. The practices are legal due to a few loopholes, but are definitely not right. The fisherman capture hundreds of dolphins at a time. Trainers from amusement parks and “Swim with the Dolphins” places come and select the dolphins they want. The fisherman kill all the unselected dolphins and sell them for meat. The film follows Ric O’Barry, who became famous after capturing and training the dolphins used in the 1960s television show Flipper. He now crusades to stop any and all wrongdoings against the creatures, feeling somewhat responsible for their rise in popularity. Ric worked with the dolphins on a daily basis and realized that they are not only incredibly smart, but that they are also self-aware.

Most of the film chronicles Ric and the team’s struggles to film the goings on in the killing cove. It is highly guarded and dangerous to get to. The team has to go to extreme lengths to plant cameras and sound equipment to capture what constitutes the last quarter of the film. The footage is shocking and disturbing. The politicians interviewed in the film may claim that the dolphins are killed humanely and instantly, but when the killing footage is revealed, it is anything but.

The film opens with some information about the general nature of the dolphin trade and the difference in price of dolphin for captivity and for meat. “Who eats dolphin meat?,” you might ask. According to the film, lots of unaware Japanese people who are sold the meat labeled as a more expensive whale meat. This confused me a bit because they had said that commercial whaling was illegal, so this left me wondering how they could label meat as whale. In any case, there are medical concerns with eating dolphin meat that can lead to mercury poisoning, resulting in some serious birth defects, among other problems. Dolphins have become incredibly toxic due to all the mercury we pump into the environment, so their meat is astronomically above the “safe” amount of mercury. This mostly affects small children, pregnant women and the fetus inside her.

The middle of the film drags a bit while they are assembling the team and the tools necessary to get the footage. This is unavoidable given the nature of the film though, as there just isn’t enough actual information here to convey. The documentary is more about getting the footage than providing you with hard facts. At times this lack of focus lends itself to feeling like a reality television show instead of a feature documentary.

I sincerely hope that they can put an end to the killing of these dolphins that happens all over the world, not just in Taiji. I feel that it’s somewhat hypocritical for me to say that and then eat any kind of corporate meat. The factory farms that produce beef, pork and chicken are incredibly brutal and just as wrong as the practices of the fisherman in Taiji, so it is hard to continue on in the same manner after watching something like this.

The Cove is beautifully filmed and very well put together. As I said before, the middle drags a bit, but not too much to detract from the overall message. An excellent documentary completely worthy of its Oscar for Best Documentary.