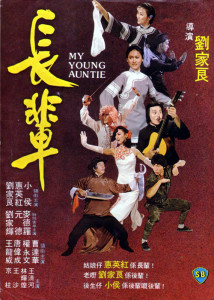 All of this comes to a head when Charlie invites his auntie to a party that he hopes will embody all of the finer sensibilities of western civilization. Now if you’ve been reading my reviews with any regularity, you know I am no stranger to weird shit in the movies. I have championed the seedy underbelly of modern cinema and heaped nothing but praise on everything from Mexican wrestling to blaxploitation. With that said, the bizarre shit that goes down at Charlie’s party was a little too much, even for me. What his attempt to throw a “western” themed party boils down to are a bunch of guys in powdered wigs, sunglasses, and French Renaissance outfits doing musical numbers, fencing with each other, and dancing to classical music. Kara Hui shows up dressed in a blonde wig and a princess outfit and Charlie himself comes prancing in as Robin Hood. All hell breaks loose when six guys get in a heated argument about which of them are the real three musketeers. Cue the Benny Hill music and guys sliding backwards down staircases and you get the general idea just how ugly this thing gets.

The film’s fatal flaw is that after dropping a bombshell so brazenly depraved and insane as the party scene, it switches gears into somewhat coherent storytelling again and expects us to follow suit for the third act. I’m sorry, but if you are going to take your viewers past this point of no return, then you have got to realize that you must brave those dark waters for the rest of your film. Nobody wants to take you seriously after witnessing your cracked-out Freemason’s ball. Even something as beautiful and exciting as Lau Kar-Leung’s martial arts choreography won’t pull you out of this deep abyss. You and your movie are just plain fucked from here on out.

If it were to stand alone, the third act is actually quite entertaining with everything from spring-loaded booby traps, nearly invincible guys who bend knives with their abs, and loads of fantastic choreography. But if you’re anything like me, you’ll still be reeling from that crazy party scene to really appreciate any of it.

While I don’t think My Young Auntie is a good film, I recommend checking it out if only for the pure spectacle of it all. It really is a difficult one to file away, and that alone might make it worth your time.