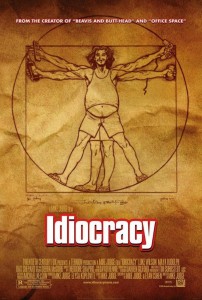 The thing with Idiocracy is that through all the idiocy, it is incredibly smart. Every small detail can be traced to a common, everyday occurrence in our times. The use of real corporations in the film is a huge success that wouldn’t have the same resonance if the filmmakers were forced to come up with sound-alike names that make you say, “Oh, that’s supposed to be McDonald’s.” Not in Idiocracy. Here we are treated to miles-long Costco’s, people named Frito and Beef Supreme, and my favorite, the new Carl’s Jr slogan of “Fuck you! I’m eating!”

The film is so ridiculously over-the-top but it works for this film very well. I do have to mention that there is some horribly bad computer-generated landscapes in the film, but it is a minor flaw in an otherwise well-done film. In fact, I was so entertained with the biting, social commentary that I didn’t even notice much about the filmmaking. I felt like I was 12 again, enjoying a film simply for its entertainment value.

If you haven’t seen this film, I wholeheartedly recommend it if you are at all frustrated with the hypocrisy of the current American society. Also, if you enjoy any of Mike Judge’s other stuff like Office Space or King of the Hill you need to add this to your list. It’s stupid, but it’s funny as hell.