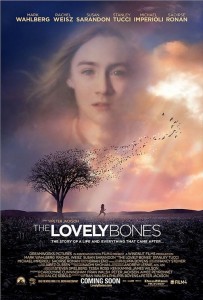 There’s definitely a need for this kind of duality given the nature of the material here, but I think there are times when he misses the mark a bit. I found some of the digital afterlife sequences overstimulating, with way too much going on at once on-screen. I simply could not take in and process everything at times. As for things that worked, there are lots of HD video camera insert shots, hyper close-ups of fingers or objects. These were skillfully done to heighten the mood and increase tension and I enjoyed them a lot. There’s also a couple of model dollhouse shots that are real fun if you dig that sort of thing. Overall, the film worked for me and the problems I had were minor nitpicks.

Acting all around was very good. Rachel Weisz is easily the weakest link, but she’s not in it much. Mark Wahlberg’s performance surprised me. After Boogie Nights, I haven’t been able to watch him in any role without thinking of his character from that film, Dirk Diggler. He has a similar delivery to his lines in most movies (like The Departed) and it basically ruins those scenes for me. In The Lovely Bones, he actually made me forget about Boogie Nights, and for me that is huge. Stanley Tucci and Saoirse Ronan don’t disappoint either. Their scene together early in the film is one of the best, with Tucci oozing that slimy, pedophile vibe to counterbalance Ronan’s naïve, innocent girl.

I hope that this film finds its audience on DVD, because it really is a lot better than the critics make it sound. Without a doubt, it is a more satisfying film than some of last year’s Best Picture nominees. Thematically, this is the type of movie that is better suited to home viewing, so I guess it worked in the film’s favor to have flopped at the box office. Overall, a very well done, emotionally moving film. I loved it.