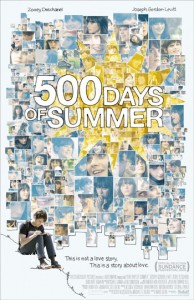 The film’s main character goes through a similar journey to George Clooney’s character in Up in the Air. They both have skewed views on love (for different reasons) and find themselves in over their heads, falling for this new person in their lives. They would make for an interesting double feature pairing because both films aim themselves at different age groups but deal with very similar themes.

(500) Days of Summer is also plagued with tons of pop culture references. I get frustrated with this kind of thing, but after the first 30 minutes or so they weren’t as frequent. The filmmakers were definitely trying to capitalize on the formula and built-in audience of Juno. The formula being: (Indie Movie + Indie Music + Obscure/Semi-Obscure Pop Culture References = Indie Box Office Gold). I don’t mind a well-placed reference but continual references to The Smiths go beyond augmentation and become demographic targeting. This is director Marc Webb’s first film and also the first produced screenplay of Scott Neustadter & Michael H. Weber. I attribute the uneven nature of the film to this. They’re throwing a handful of things at the wall and hoping most of them stick. Some do, and those that do work well.

Overall, it’s a moderately enjoyable movie that is at times boring, at other times clichéd, and at other times still, clever. I liked it, but you’d never catch me watching it a second time.