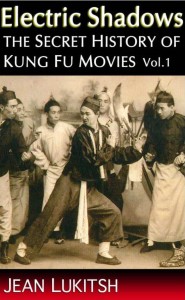 I consider myself fairly knowledgeable about martial arts films, but prior to reading Jean Lukitsh’s Electric Shadows: the Secret History of Kung Fu Movies Vol. 1, I knew absolutely nothing about the birth of Chinese cinema or how deeply embedded the martial arts genre has always been within it. There was always a part of me that imagined the early days of Chinese film were lost to the sands of time; China is not known for their film preservation, and few films from before the 1940s or ’50s seem to be available to someone as far removed from China as I am. So I was surprised and fascinated to find that this book not only contained stories from the silent era, but also included a few links to clips of some surviving films, including this rather impressive fight scene from the 1927 film Romance of the Western Chamber (which, oddly enough, is available on DVD from Netflix or Amazon in its entirety)!

Names like Ren Pengnian or Zhang Shichuan previously meant nothing to me, but the book has enlightened me to their contributions to the formation of martial arts as a genre, and to Chinese cinema overall. Some of the most interesting passages in the book even connect some of the pioneers of Chinese cinema with later greats like Sammo Hung or others. Sammo Hung is well-known as one of the multi-talented filmmakers responsible for the dominant rise of the kung fu film through the ’60s, ’70s & ’80s, but to find out that his grandmother, Chin Tsi-ang (later known as Mama Hung), was one of the genre’s first female stars was mind-blowing. I later looked into her career in more depth and found out that she continued working throughout her life, appearing in tons of classic Shaw and Golden Harvest films as an extra, and one of her final performances can be seen in Wong Kar-Wai’s In the Mood for Love.

Perhaps the biggest surprise to me was that the martial arts genre began in the silent era. I was under the impression that there were some kung fu and wuxia films sprinkled throughout Chinese film history, but that it wasn’t a fully fledged genre until the mid-’60s when the Shaws kicked off their color productions. In fact, the Shaw Brothers were merely revitalizing an already well-established genre. This becomes plainly apparent in their selection of Temple of the Red Lotus as their first color martial arts film, as it is a remake of the first martial arts smash hit, The Burning of Red Lotus Temple (1928, directed by Zhang Shichuan). But I don’t want to go into too many specifics and ruin the book’s impact. Fans of classic martial arts films will learn much about their beloved genre in a very quick and easy read. It’s a pretty short book, too, but the amount of information and history packed into it will astound you. I’m definitely going to read it again to help absorb some of the intricacy of the who’s who aspect to the history, and I wouldn’t be surprised if other fans felt the need to do the same.

And the best part is that it’s a steal at only $2.99! If only film school was so affordable. The end of the book teases four future volumes, and since it’s already been over a year since this volume was released, hopefully Vol. 2 isn’t too far off.