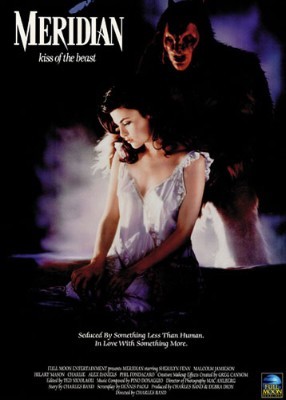 Meridian (1990)
AKA Meridian: Kiss of the Beast, Phantoms

I rarely know much about these films before watching them, in an effort to remain open-minded and free from pesky expectations. In the case of Meridian, I had only seen the poster. It gives off something of an erotic, Gothic vibe and surprisingly, that’s exactly what Meridian is. And it’s good! Imagine that. Meridian is something completely different for Charles Band and I for one welcomed the change readily. Too many times I’ve sat down to a Full Moon film devoid of plot, FX and entertainment for the sake of reviewing all of their films, but Meridian was actually quite enjoyable to watch.

Without giving too much away, Meridian is about a girl, a castle and a centuries-old mystery that surrounds them both. It’s more of a Gothic romance than a real horror film, but I think horror fans looking to branch out from the everyday slasher film might still enjoy it… I did. The story plays with conventions and expectations just enough to keep you guessing (to a degree), and it continued to surprise me up until the end. It definitely has its missteps and some of the characters/plot points are underused/unfulfilled, but for what it is Meridian was quite impressive. It’s an interesting Full Moon film that stands alone in terms of story and focus, and for that, it’s worth checking out.