The House by the Cemetery [Quella villa accanto al cimitero] (1981)
AKA The House Outside the Cemetery, Zombie Hell House

My favorite and the most easily accessible of the three Fulci movies I watched recently (the others being City of the Living Dead & The Beyond). Like the others, the plot is a definite weak point, but the atmosphere and the gore make up for it immensely. The gore is also a lot less “fun” in this one, instead going for much more realistic, brutal violence with gallons of blood flowing. Well, it’s not all realistic, there’s a bat attack that’s hilariously wild and ridiculous, but that’s probably unintentional. And just make sure the bat scene is the height of absurd weirdness, the bat provides more squirting blood than virtually all the other scenes combined. This moment is insane in the best way possible, as are all the other horrific bits (although those are insane for the sheer audacity to even attempt to get something this brutal past the censors). Good stuff. Get it on 4k or Blu-ray from Blue Underground!

Christmas Evil (1980)
AKA You Better Watch Out, Terror in Toyland

Harry was never the same after he saw Mommy kissing Santa Claus! The event scarred him deeply, developing into a fixation on everything Christmas and Santa-related. Harry’s now in his 40s and working at Jolly Dreams, a toy manufacturer. Christmas Evil is a slow-burn horror movie that’s more character study than traditional horror movie. Yes, Santa murders people, but this isn’t a Santa slasher movie. We see Harry’s psychosis evolve from simply caring about making quality toys for the holidays, to being driven to the point of shoving a toy soldier’s sword through a dude’s eye. But because we see the whole run up to the murder spree, the victims are not faceless and nameless. They are enemies to the spirit of Christmas, so in a weird way Harry is a hero of sorts, in his own mind at least. This is brought home beautifully in the ending of the film, which is equal parts touching, joyous and symbolic. Director Lewis Jackson twists the knife of psychosis at will by utilizing well-known hallmarks of the season, be it Harry maniacally calling out reindeer names while he’s driving away from the scene of the crime, or a cassette tape of a Christmas song warping and distorting as we see the aftermath Harry leaves in his wake. With each reference, Harry seems to slip deeper into his twisted Santa persona, further subverting the Christmas music and general mythology. Christmas Evil may be a low-budget film, but it is very well-crafted and the lead performance by Brandon Maggart is fantastic. Get it on Blu-ray/DVD from Vinegar Syndrome!

Deadly Games is the result when you combine the ’80s kids’ affinity for muscular, gun-laden action heroes, a psycho in a Santa suit, and Home Alone. It’s not as great as that might sound, but it delivers more than enough laughs and genuine peril to make for a fine experience. Our lead is Thomas, a computer whiz kid who questions the existence of Santa Claus. He sets up cameras to record Santa in the act (which he can watch via his forearm-sized TV/camera controller), but his mother warns that if Santa sees him watching, Santa will turn into an ogre. Thomas also decides instead of writing a letter to Santa this year, he’ll just use a computer program called “3615 code Père Noël” (also the original title of the film). There is a Santa on the other end, but it’s a crazed lunatic out for young blood! What struck me the most about this movie was how brutal it was at times, and how much different it felt from American films with kids in peril. Thomas is actually harmed, ending the film bloody, exhausted and shell-shocked (to the point of resembling a pint-sized John McClane). It’s a little crusty and slow moving in parts, but overall it’s a good watch if you can hunt it down. (Update: The film has been released by Vinegar Syndrome to 4k/Blu-ray! Get it here!) 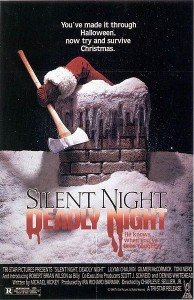