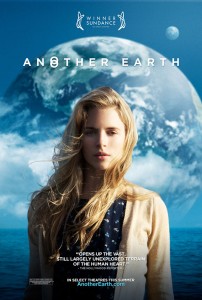 Expectations: Moderate. The sci-fi angle might be cool… I’m cautious though.

I love science fiction, and sometimes it leads me down paths that I’d rather have avoided. Another Earth is one of those experiences, and I am hard pressed to find any worthwhile point of the film to validate its existence, let alone its place on some lists as one of the year’s best. Everyone has their own viewpoint so I can’t begin to theorize as to why this film resonates with some people, but it definitely left me cold and bored.

Another Earth tells the story of Rhoda, a promising high school student recently accepted to MIT. Around the same time, a heretofore unknown planet has appeared in the sky and while driving at night, a radio DJ informs his audience that they can make it out as a small blue dot, near the North star. Rhoda, preoccupied with her thoughts of the planet, cranes her head out of the car’s window to see it… and promptly smashes into a car holding a family waiting at a stop sign. Four years pass and Rhoda is a mere shell of the girl she could have been. Earth 2 (as it’s now known, and no, it’s not this Earth 2) has gotten a bit closer and Rhoda still wonders if there’s life on this habitable planet.

It’s important not to get excited for any of those sci-fi elements to pay off in any meaningful way, because they don’t. Another Earth is only a science fiction movie because without that added element, it’d be just another in a long string of tortured love stories where the perp and the victim become entangled in each other’s lives without the victim knowing it. It’s remarkably similar to Melancholia in using a science fiction backdrop for a character study, and both films feature a new planet springing up out of nowhere, but where Melancholia is about the end of the world and handling depression, Another Earth is about consequences. It’s not compelling though, and it’s painfully slow.

It’s not all that well-shot either. It takes on something of a Lars Von Trier vibe in the camerawork, as it’s all shot on video and lots of it is handheld with zoom adjustments mid-shot. This is director Mike Cahill’s first feature though, so many of the visual choices feel like he’s trying hard to be artful and meaningful, but for me they nearly all fell flat. I will say that I see a lot of potential here, and Cahill could easily deliver a quality film later on down the road. I don’t know that I’d jump at the chance to see it based on this disappointment, but I’ll try to keep my mind open.

The quick version: It’s slow, it’s boring, it’s not worth your time.