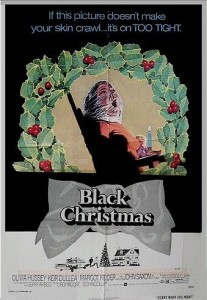 The story is pretty basic: a sorority house receives strange, sexually aggressive phone calls while a weirdo murderer lurks about in their attic. That’s pretty much it. The film is built upon the premise that you identify with the girls of the sorority, most notably star Olivia Hussey, as she slowly confronts the evil that stalks her. For this to work, the audience must be able to place themselves in her shoes and in her mind; we must live within her fears. This is where Black Christmas fails because right from the first scene we’re also privy to the mind of the crazed killer. We follow him from outside the large sorority house as he climbs the trellis and slides his way into attic. As the film moves along we jump perspectives between the girls and the killer, further allowing the audience to know more than the characters they should be identifying with, and therefore many of the scenes that should be tense and full of scares are pointless and drawn-out because we know exactly where the guy is! END_OF_DOCUMENT_TOKEN_TO_BE_REPLACED