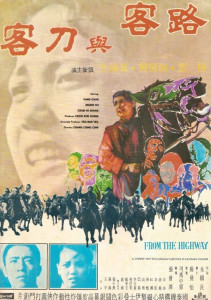 From the Highway is an impressively produced film… if you can watch it without holding its legacy against it. The film is largely considered the first color hand-to-hand kung fu film, but the title is a misnomer in this case. From the Highway is only barely a martial arts film, let alone a hand-to-hand film. It’s actually a drama surrounded by some traditional martial arts traits. In this way it recalls director Chang Tseng-Chai’s later film The Casino, which is essentially a drama until the action-packed finale.

The lead character, He Tian (Peter Yang Kwan), is perhaps the genre’s first prominent unarmed character, though. If I remember right there are older Shaw Bros movies with hand-to-hand scenes, although I don’t remember other characters who only fight unarmed. I don’t know enough about martial arts film history to say definitively that he’s the first, but if nothing else he’s an unarmed fighter amidst a multitude of weapon-wielding contemporaries. But even if this character trait is notable, it only seems notable because of the film’s built-up legacy. As a viewer in 2015, I’m looking for the seeds of later films; I’m looking for the “birth” of the kung fu film. And it’s just not here. On the other hand, when I watched The Chinese Boxer under the same mindset, it lived up to the legacy of being “the first hand-to-hand kung fu film,” and was impressive for how much it actually resembled later films.