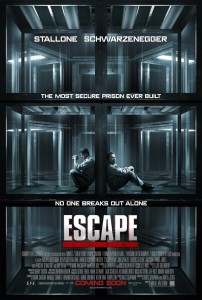 Any time a new film starring Sylvester Stallone or Arnold Schwarzenegger pops up, I’m sure to see it and probably like it more than the average Joe based on my lifelong love of their work. Even considering this, I’ve headed into each one of their modern films with hesitation and tempered expectations. I’ve enjoyed every one so far, but I actively recognize that my unabashed love for the leads plays a large role in the film’s success. In the case of Escape Plan, though, I can honestly say that this is a fantastic prison break movie which also happens to star a couple of my favorite actors. The combination proved to be absolute GOLD; I loved Escape Plan from start to finish.

To tip the film’s hand too much would spoil the fun of the movie and its slow, metered build (which is paced perfectly), so I’m going to forgo my usual plot description. Just know that Stallone and Arnold are in prison together and they hatch an escape plan. But they aren’t in just any ol’ prison. No, they’re in a strange, almost futuristic prison, so breaking out isn’t going to be one of those “tunnel out and scale the wall” sort of gigs.