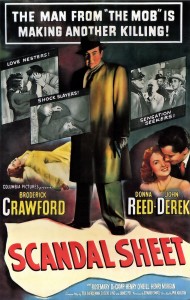 At this point in my review series on the writing and story credits of Sam Fuller (that he did not direct), I’ve learned to expect few returns. The films rarely recall the work of Sam Fuller himself, as his fiery style had usually been watered down by a few studio writers before the films made it to the screen. But right from the opening scene, Scandal Sheet evokes the spirit of Fuller’s work. It definitely doesn’t feel like something Fuller made or anything, but there is a raw, pulpy vibe that will likely satisfy all but the most critical Fuller fans.

One of these critics was apparently Sam Fuller himself, as the film’s only mention in his memoir, A Third Face, is to quickly dismiss it as “disappointing.” I have no doubt that to Fuller Scandal Sheet was indeed a total disappointment. The film was based upon his first novel, The Dark Page, which he finished writing right before leaving for the front lines of World War II. While overseas, he learned that his mother had been successful in finding a publisher for the novel, and later (while Fuller was still at war) the novel’s film rights were sold to Howard Hawks, who hoped to direct a film version starring Humphrey Bogart and Edward G. Robinson.