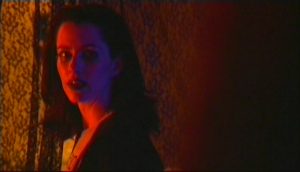 In terms of the movie, the only real problem is that not enough happens. Witchouse 3 is only 76 minutes (credits and all), but it feels longer as there’s obvious stretching. The characters talk about things more than we see things, such as the witch fair the characters attend off-screen. I’m OK with a slow burn — like Witchouse 2 — but there’s not quite enough in this film to hang your attention on. The central premise and how it all plays out is well-done, but the amount of story would work better as an anthology segment. This probably relates to the budget, though, and Bookwalter did the best he could given the circumstances. 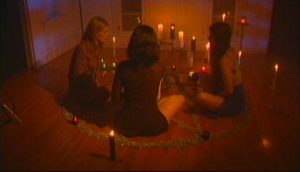 Horror films rarely scare me; it’s not the reason I watch these types of movies. I grew up with more than my share of trauma, so there’s something fun and cathartic in seeing victims overcoming monsters. But dag-nab-it, Witchouse 3 actually got me twice! The first was more of a creep-out, during the expressionistic, hallucinatory invocation of the witch. The film should carry a seizure warning for this scene; it’s pretty strobe-heavy. It comes out of nowhere in an otherwise normal, shot-on-video horror movie, so I was both creeped out and in awe of the bold artistic stroke. The other time involved the witch behind a frosted glass shower door, her evil visage obscured and refracted by the glass. I love when horror movies bring horror to every day situations, and few are as vulnerable as the shower. Great stuff.

While both previous Witchouse films are better than Witchouse 3, I still enjoyed this one. My affection for the work of J.R. Bookwalter continues to grow. I wish it were shot on film so that it might find a bigger audience, but honestly the audience is only so big for a film titled Witchouse 3: Demon Fire. 😀

Next time I get around to a Full Moon movie, I plan on checking in with the more recent film, Weedjies: Halloweed Night! See ya then!