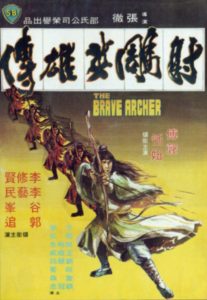 Sometime during the Jin-Song wars, two heroes of the Song dynasty are living with their wives in a quiet corner of the world. They’ve sworn their newborn children to be blood brothers, and when a wandering Taoist visits, he names the boys — Yang Kang & Guo Jing — and inscribes their names onto small swords. Unfortunately, this happy opening quickly turns sour when Jin soldiers attack and kidnap Yang Kang and his mother. In the wake of the skirmish, the Weird Seven, a group of powerful martial artists, take in Guo Jing and his mother, agreeing to raise the boy as their own. The Taoist promises to monitor and train Yang Kang, and in 18 years’ time, they will all meet up to see which boy possesses the superior kung fu. It’s a great setup for the film, but don’t get too attached. It does not resolve in this film at all, but that doesn’t mean that you can’t have fun on the journey that The Brave Archer provides. This is a different sort of wuxia, unique from Chang’s previous genre-defining work or Chor Yuen’s genre-redefining films.

I’ve heard a lot about The Brave Archer over the years; everything from “It’s great” to “It’s awful,” and everything in between. I arrived to the movie with my own baggage, as well. Knowing that this was Chang Cheh’s first film back in Hong Kong after the artistic freedom he experienced in Taiwan, and that in his memoir he states, “the five years of my second spell at Shaws warrant little mention,” it’s hard not to come into The Brave Archer with the idea that Chang was frustrated with the situation and the state of the Hong Kong industry. Having been the leader of the charge in the action genre for so many years, to now be relinquishing that title to Lau Kar-Leung and Chor Yuen (and those not at Shaw like Sammo Hung, and later Yuen Woo-Ping and Jackie Chan), make it a distinct possibility that he was coerced into making a wuxia — a genre he felt was tired and had reached its pinnacle with Golden Swallow — to satisfy the fanbase revitalized by Chor Yuen’s films. I have a feeling that’s only partially true, though. Chang also talks in his memoir of his great friendship with Jin Yong, so I can imagine Chang choosing the project and feeling a personal responsibility to do the work of his friend justice.

The Brave Archer is based on one of the most popular wuxia novels of all time, Jin Yong’s The Legend of the Condor Heroes. It was originally serialized in Hong Kong newspapers from 1957–1959, and I get the impression that its reputation snowballed with each passing year. It has been adapted into multiple film and television series, starting with Story of the Vulture Conqueror in 1958. The most recent adaptation is a 2017 TV series, although Tsui Hark announced last year that he would be making a new film version soon. Having seen this film, it’s easy to understand how the TV series format is better suited to the story, though — for instance, the well-loved 1983 adaptation runs roughly 41 hours! At the beginning of 2018, the first volume of the novel finally received its first English printing, too, with the second volume coming next year. So it seems that the popularity of the novel only continues to grow, leading to inevitable comparisons to another landmark fantasy novel with a similar trajectory: J.R.R. Tolkien’s Lord of the Rings.

Knowing the popularity of the novel made my expectations soar, so to find the film so atypical and meandering was a real shock. I wrote in my review of Death Duel that it was a bit sloppy, but it looks coherent with pinpoint precision compared to The Brave Archer. The film’s unique structure and storytelling created a wuxia unlike any I’ve experienced thus far, though. It is a wuxia with the pacing of a novel, attempting to tell the story of its expansive, martial world by spreading out over three films. I previously thought that The Hobbit films were the only movies to have attempted anything as ambitious as this, but it turns out Chang Cheh beat Peter Jackson to it by about 35 years! I suppose Wong Jing’s Kung Fu Cult Master — an adaptation of Heaven Sword and Dragon Sabre, the third book in Jin Yong’s Condor series — is a similar situation, but unfortunately the connecting follow-ups were never produced. But while three films allowed The Hobbit space to breathe and elaborate on small details, The Brave Archer has no such benefit. The film is absolutely jam packed, because even three films is not enough to capture the entire novel.

That being said, I loved The Brave Archer, both in spite of these issues and because of them. The martial world of The Brave Archer feels more akin to a comic book than to Chor Yuen’s danger-fraught, survival-of-the-fittest world (perhaps a product of Chor favoring author Gu Long’s work for adaptation). Whether this is an accurate representation of Jin Yong’s novel I don’t know, but I like the idea of the two most popular wuxia authors each having their own distinct version of the martial world. In his memoir, Chang calls his Jin Yong adaptations unsuccessful in bringing Jin’s rich martial world to life, saying that even at their best the films aren’t much more than a structured series of situations from the novel. The Brave Archer certainly reflects this sentiment with its episodic, backbone-lacking structure, but I found the story to be invigorating and engaging regardless. Whether or not Chang sticks the landing and delivers a satisfying tale over the course of the two sequels remains to be seen, but I have a suspicion I’ll have to wait until Tsui Hark’s version for the cohesive film (or films) that the story really deserves.

The Brave Archer deserves its reputation as a hit-or-miss movie; it’s one of the most “not for everyone” types of movies I’ve ever seen. The unique qualities it exhibits endeared the film to me immensely, and no matter how confused I was at points I absolutely loved it. It is a lot to take in, though, no matter how much fun you’re having with the moment-to-moment thrills. The story is definitely meant to have been told over multiple films, but even this is no excuse for just how muddled some of this movie is. I would say that 100% of first-time viewers will be confused, but whether you will be simultaneously having a good time only you can say for yourself. I loved it, and I immediately wanted to watch it again as soon as it ended, so I look forward to my inevitable re-watches, as well as the continuing saga in the sequels.

Next up in this chronological journey through the Shaw Brothers Martial Arts catalog is Sun Chung’s Judgement of an Assassin! See ya then!