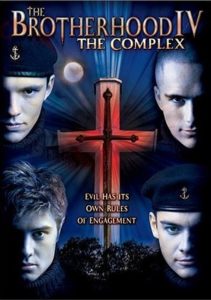 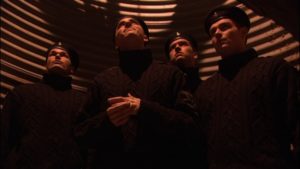 Lee spends a good part of the movie trying to figure out the secret of the Black Skulls, but he’s never attempting, or even tempted, to join them. This sets Brotherhood IV apart from its brethren, and I found it to be a nice touch. Lee is supposed to be a ridiculously smart kid, so to see him stay above the machinations of the villains felt like a good representation of his character. Further along this line, it’s not even completely clear that Victor Thanos (Graham Kosakoski), the current leader of the Black Skulls, has singled Lee out for possible recruitment. I got more of a hunter/prey vibe, but unless I missed something I don’t think they ever fully explained themselves. All I know is that we see a couple of dudes pledge the group through a ritual of underwear, fingerpainted pentagrams and candles, while Lee is instead taken to a dream orgy. Like I said, who knows. Just go with it and enjoy! 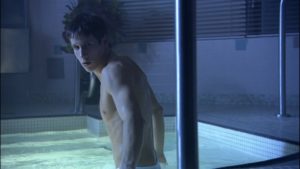 I mentioned it before, but it bears repeating: if you’re a fan of DeCoteau’s trademark “dudes in underwear,” then The Brotherhood IV: The Complex will not disappoint. Well, it shouldn’t, because of the volume of underwear on display, but I suppose I shouldn’t guarantee anyone’s enjoyment. 🙂 Anyway, the first set of boxer briefs pops up roughly 30 seconds into the movie, and it is definitely a sign of things to come. For me, the best bit was when an underwear guy gets out of the pool and coyly sashays down the hallway to investigate a noise. He’s scared of what the noise might be, but not too scared to look unfashionable!

The Brotherhood films are definitely not going to satisfy all viewers, but The Brotherhood IV: The Complex is easily one of the best entries. It’s not quite as entertaining as the original, and it doesn’t have anything close to the pool scene of the sequel, but it does have a great mythology for the Black Skulls and some very enjoyable lightning. I try to stay away from any real spoilers, especially for this sort of thing, but anyway, there’s a reveal as to where the lightning has been coming from throughout the film and it had me in tears of laughter. One of the best B-Movie ideas I’ve seen in some time; I can’t say that it makes much sense, but it was definitely a lot of fun!

If you consider yourself a fan of David DeCoteau, this is a must-see.

Next time I get around to a Full Moon movie I’ll be watching the Moonbeam flick The Werewolf Reborn! See ya then!