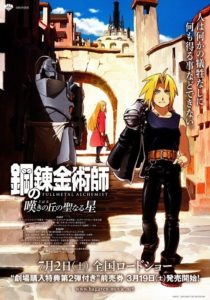 Just like the series, the movie looks and feels like a much more lighthearted tale than it is. The animation is bright and actually rather generic looking, although it doesn’t have time to keep up the lighthearted humor as much as the series did. Despite the often cheery visuals, it keeps throwing horrific death and bloodshed everywhere, and has a strong sense that nothing ever gets a nice little happily ever after. Those political tensions definitely explode and there’s no easy fix for anything in this film. Most stories this dark would choose a more sombre visual style to reflect the story’s themes, but not Fullmetal Alchemist. It likes to be disorientingly nonchalant in the face of large-scale human suffering and tragedy. 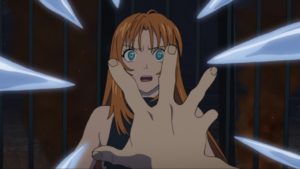 But the story is far from just one of political upheaval. It’s also an action extravaganza. While the brothers are on a train ride, some fugitives get caught. Then a werewolf shows up out of nowhere to fight Ed and Al. And then another train gets attacked by terrorists on hang gliders, but it turns out that it was all a trap. Then it turns out the fugitive the brothers were chasing also happened to be on that train and he gets in a fight with the terrorists. AND THEN the trains pass each other and the two fights blend together, ending with the trains crashing into the station. At some point in all that, I realized I was only 15 minutes into the movie and it felt like an action scene that should have been the big climax of an entire film.

So I was wondering just what the film would do for its actual climax. I’ll just say that it involves a huge flood of magma and a lot of people getting shot, stabbed, and otherwise mutilated while alchemists blast magical attacks all over the place. In short it actually does live up to its spectacular beginning. The middle of the film has its fair share of milder action scenes as well, but it’s also filled with loads of explanation, which is pretty necessary to understand what’s going on. It’s paced very well, though, never putting in too much exposition to make the film dull, but also managing to provide enough explanation that the plot never feels too complicated to follow. 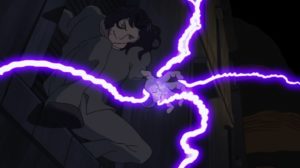 Thematically, the film deals with the quest for power and the price of attaining that power. Ed and Al bump into an alchemist named Julia who wants to use alchemy to turn the political situation around, and the brothers try to teach her the high cost they have paid for their own attempts to mess with the natural order. Julia also has a brother and the parallels between the two pairs of siblings could have been exploited more, but after thinking about it I’m not sure I would have liked the film better that way. It might have felt too heavy-handed or gimmicky. Besides, this is an action thrill ride. It doesn’t need to lean on its intellectual themes to be entertaining.

I was never in love with the Fullmetal Alchemist series. I always felt it was just OK. But I had a lot of fun with this film and enjoyed it a good deal more than the series. So if you were never a fan, then this movie might change your mind. It’s a solid film without any glaring issues and stands on its own without any knowledge of the series, so for those who aren’t familiar with the series at all, this is a good place to jump in and test the waters.