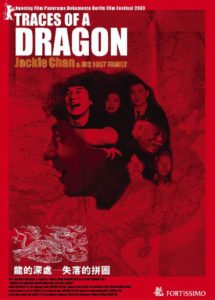 Like Jackie, his father is a charismatic man, and watching Jackie with him is endearing and immensely humanizing for the star. Traces of the Dragon does a great job of allowing Jackie’s father himself to tell the story (his mother was too ill at the time to tell her own story, though she does appear in the film), but what really takes the film to the next level is that through their stories of war and strife it becomes apparent that their story is just one among millions like it. The Chinese people of this era had rough lives blown apart by the wars, and so the film becomes much more important and historically relevant than just detailing the lives of a star’s parents. It is a personal look back into the past, a phenomenal tale of survival that typifies the Chinese experience of the time. 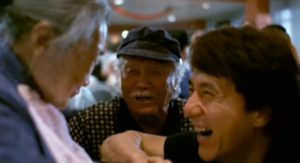 A big part of the documentary is the story of how Jackie is actually not an only child as he thought for most of his life. He has two half-brothers on his father’s side, and two half-sisters on his mother’s. All of the siblings are also interviewed about their own lives, which, like their parents’, were not easy in the slightest. Both sets of siblings were left behind in mainland China by their respective single parents, so they were forced to get by any way they could. Just the fact that the brothers are alive is astonishing, as the oldest was only around eight years old when his father was forced to leave them behind.

As a Jackie Chan fan, Traces of the Dragon places his struggles as an artist into perspective. Out of the millions affected by the wars in China, all the pieces somehow aligned to give the world Jackie Chan. This is amazing, and without Jackie Chan’s influence the entire Hong Kong industry (and in turn, world cinema) would have been forever different. This is meaningless in the face of the struggles enduring by the wartime Chinese, but it did make me think about how art survives through the support of others. In a weird way, it makes sense that an artist as intense and successful as Jackie Chan would have a tale of this magnitude that elevated him into the position to be everything he could be for his art. The Chinese spirit is a remarkably resilient one, without a doubt.

Next up in this chronological journey through the films of Jackie Chan is the globetrotting Around the World in 80 Days! See ya then!