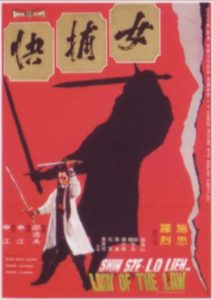 Lady of the Law opens strongly with a large group of bandits hiding in the bushes alongside a road, waiting to ambush a security bureau convoy transporting some kind of precious cargo. What that cargo is doesn’t matter to the story, but we do care about the man leading the convoy: Chief Jiao Tianhao (Tung Lam). He is a well-respected member of the security community, renowned for his impeccable reputation for getting the job done. But on this fateful day, the bandits known as the Forest’s Four Evil Spirits have taken Jiao’s son hostage in an attempt to force him into discrediting his reputation. Those bastards!

This is but the tip of the story iceberg, and eventually it becomes a tale about Lo Lieh and Shih Szu’s characters and a tangled web of misunderstandings and deceit. This type of storytelling is sometimes frustrating, because we know everything about the situation and we’re in a waiting game for the characters to come around to the inevitable conclusion. In Lady of the Law this flaw does rear its head some, but the ins and outs of the story are so much fun that you likely won’t have too much time to think about it — I know I didn’t! Plus the “inevitable conclusion” of the film is far different than I imagined it to be, so I can’t exactly hold it against the movie if it surprised me, now can I? All you need to know is that like any classic Shaw wuxia worth its silver taels, the story contains a ton of twists and turns, and a good many of them made me shout, “Those bastards!” 🙂

The action was choreographed by Leung Siu-Chung and Ching Siu-Tung, and they have put together some excellent examples of wuxia fantasy. One part of the finale occurs with the combatants fighting on a tightrope, and regardless of the film’s age and the standard wirework of the times, it’s a great piece of choreography. There are also a number of group fights that exhibit a nice ability to fluidly take the main character through sword strikes that go from one person to the next without breaking the flow. It’s not perfect, but it’s very well-done, especially so if it was done in 1971! Lots of jumping and wirework is choreographed in as well, giving the illusion of much more nimble fighters and reminding me a bit of Ching Siu-Tung’s later work.

Lady of the Law is an older style of film, for sure, but it’s an action-packed, immensely entertaining film. Definitely recommended to Shaw fans, and hopefully it’ll make you say “Those bastards!” as much as it made me.

Next up in this chronological journey through the Shaw Brothers Martial Arts catalog is the next film in Chang Cheh’s Shaolin Cycle, Disciples of Shaolin! I can’t wait! See ya then!