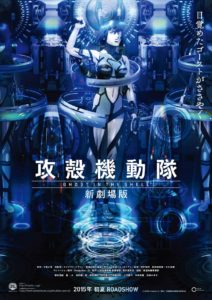 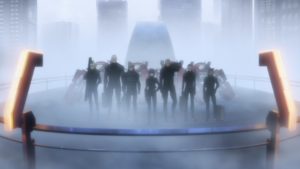 The film also delves into an aspect of the Ghost in The Shell world that hasn’t been explored before, namely what happens to obsolete cyborgs. It has certainly dealt with obsolete robots before, but not with obsolete prosthetics that leave a person with body parts that can no longer be serviced since those parts are no longer manufactured and are also incompatible with the new prosthetics that are still in production. There’s a population of people who can’t maintain their bodies, and people are afraid that the new generation of cyborgs are going to suffer the same fate all too soon as technology continues to advance. Presumably these problems got solved pretty quickly since Stand Alone Complex featured a scene where Major Kusanagi swaps out her brain into a new body, and it seems to be a pretty well-established routine by that point in time. 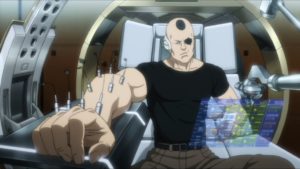 So the movie finds new ground to explore while still expanding on themes and ideas from the original. All well and good, but I did have some trouble following the plot. It’s a bit too rapid fire for the intricacies going on. Of course, convoluted webs of deceit are the bread and butter of Ghost in the Shell, and The Rapidly Aging Movie wouldn’t be living up to its ridiculous title if it didn’t have any subterfuge of its own. The problem is the lack of cues that the audience can use to connect facts together. For example, there are a pair of twins in the film’s opening that are fairly important to events later on, but without a clear sign that they are now the giant red brain looking robot thing, that fact doesn’t register until after it would have had the appropriate dramatic impact.

To some extent, this is just letting the audience do the thinking rather than treating us like idiots, and that’s great. But it often left me at a loss for following the plot. It’s a tricky balancing act, no doubt, but I think the film went a bit too far in the obscurity direction. This is at odds with the fact that I saw the true villain coming from a mile away. It’s strange that with all the confusion surrounding the finer points, the most important thing to keep hidden from the audience was the most obvious part of the plot. 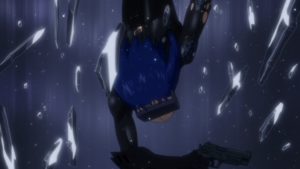 I could also quibble about its inconsistencies with the rest of the Ghost in the Shell franchise, but the different versions of the franchise have never really used the same continuity anyway. The new voice actors threw me for a loop, especially the new guy playing Aramaki, who always had a very distinct voice (even in the English dub, where he never struck me as odd). This disconnect is amplified by the sleek modern animation that doesn’t look quite the same, or as good, as the original 1995 film. But these issues are just petty nitpicking.

Overall, the film has a solid mix of action, intrigue, and philosophizing, which is important for a Ghost in the Shell film. It doesn’t look quite as good as the original, but it still looks pretty good, and the action scenes are the thoughtful outwit and outflank the bad guy kind of stuff that I wish had been more prevalent in the various Appleseed films. If I have a complaint about the visuals, it is that there aren’t enough good establishing shots to get a sense of the film’s setting, which in an intellectual action scene is pretty useful for understanding what’s going on. 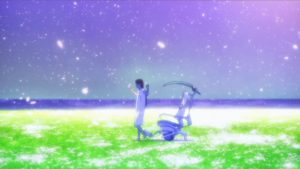 There is one other real concern I have, and it’s actually something I should have noticed right back in the original film. The Soon To Be Outdated Movie ends with a recreation of the opening scene from the first film where Major Kusanagi assassinates a guy in a hotel room. Since it is also the first scene in the manga, it is most likely the first scene anyone ever sees of Ghost in the Shell, and is very iconic to the franchise. It introduces the concepts of high technology and scumbag politics that drive most of the franchise’s stories. But it also makes no sense.

Kusangi is a law enforcement officer, and in this film she expressly coaches her team not to make kill shots. They’re supposed to be arresting people and trying them in court. So why is she performing a blatant political assassination? I never noticed before because it’s the first event in the series. We have no context to place it in until we’ve forgotten about it. But seeing it in context now has made me question the whole thing. 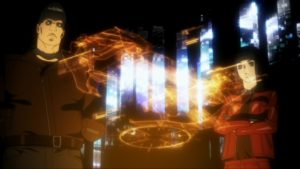 I hesitate to trash talk the film, though. Much of what I don’t like about it is due to how little of the plot I was able to follow. There were little connections all over the place that were clearly meant to be clues and insights into the story, but the pacing was too fast for me to keep up with it. I don’t think it’s because I’m getting too old, so it’s probably a flaw in the film itself, but I also think this is a movie that will make a whole hell of a lot more sense when I watch it again some day, preferably in closer proximity to the original film. Like I said, those connections are there, they’re just too tricky to pick out in a single viewing.

So I’m having a hard time deciding how much I like the film. It’s just a big, confusing fog in my head at the moment. But I can say that it feels like a worthy successor to the franchise, even if Ghost in the Shell: It Used to be the New Movie will soon be every bit as obsolete and incompatible with new versions as the cyborgs in its story. (And if it turns out that highlighting the theme of new technology becoming outdated was the whole point of calling it The New Movie in the first place, then well played, unidentified title creator. Well played, indeed.)