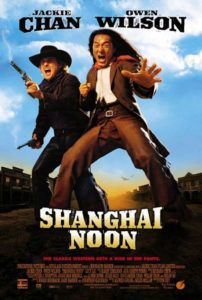 As Jackie’s Hong Kong films have proved, it’s perfectly fine to put him into a loose story as long as the action and comedic elements do their part to keep the entertainment factor high. I think the success of this film overall shows that it did this for a lot of people, but for me it’s just a poor American comedy with a few good Jackie moments (which, honestly, aren’t even that great). Jackie hardly has any time to show the audience what defines him as a physical performer, and in his second big American film that seems like a pretty risky move! I suppose the film attempts to show Jackie more in a comedic performer role, showcasing his acting and his ability to play off of Owen Wilson, but I can’t help but want a more active Jackie in these days when he was still incredibly capable in this regard. For a Jackie movie, it just feels like there’s so little of Jackie’s essence woven into the film.

The script does an OK job of bringing together the Old West and the Old East, but it’s also pretty lame and tired to just throw Jackie into a story that’s all about his Asian heritage. It also approaches Jackie’s integration into the Old West through outdated and ignorant American sensibilities that define non-American characters as curiosities ripe for questionable satire and jokes. As usual, the old defense of “It’s a period film! That’s how it was then!” could be applied to Shanghai Noon, but the film is equally modern in other aspects, obviously unconcerned with period accuracy. As such, the casual racism seems more representative of the resilience of these thoughts during the time the film was made. I mean… the Native Americans are saying “How Kemosabe!” — What is this a 1930s western?

In terms of action, there honestly isn’t much to speak of. There is a lot of potential in the situations Jackie finds himself in, but virtually every bit of this is squandered with shitty angles and editing that Americanizes Jackie’s action and refuses to show him actually doing much. If you’re going to write and film a scene where Jackie is jumping from train car to train car, but then you just edit it together like you would with any “normal” Hollywood actor, I fail to see the purpose of having the scene at all. Stuff like that. The fights are incredibly minimal as well. The best of these is probably an exchange between Jackie and unsung Hong Kong actor Yu Rong-Guang, where the two men find themselves switching weapons every few seconds. They work their way through a whole series of Chinese weaponry, all of which seemingly appears out of thin air simply to serve the scene.

As much as I don’t think Rush Hour is a great Jackie film, it does a good job of marrying Jackie’s Hong Kong style of action with an American action-comedy production. Shanghai Noon is far less successful in this regard, and I’m honestly surprised that this movie is as well-liked as it seems to be. I’m definitely harder on it because of my specific love of Hong Kong’s style of action, but even just taken as a comedy it’s not very effective. I do love the little Chinese drinking game they do in the bathtubs, though. 🙂

Next up in this chronological journey through the films of Jackie Chan is the 2001 Hong Kong film The Accidental Spy! Haven’t seen it… hope it’s better than Shanghai Noon! See ya then!